After 48 hours of on-and-off travel, I arrived in Kyotonabe on Wednesday. It has been an absolute whirlwind and only today (Saturday), have I had a chance to stop and relax properly and get used to my new home.

The flat is unremarkable but has everything I need. A tiny kitchen and bathroom and bed that folds into the wall for extra space. The fridge and microwave are in the bedroom but… who’s complaining? I’m in Japan. I’m just glad its clean and doesn’t smell.

After arriving at 4pm on Wednesday, I was up at 7am the next day to go straight to a Japanese proficiency test in a huge hall on the main Doshisha Campus, Imedagawa, surrounded by a hundred other international students. I could have probably done a lot better in the test but jet-lag got the better of me. Even after the test and orientation, I didn’t stop and headed straight to Osaka (about 40 mins away from Kyoto by express train), to represent Southampton University in an International Exchange event. I thoroughly enjoyed representing the uni and meeting so many different people. We got back at 10pm and even after the long day, my body still wouldn’t let me sleep!

Friday started with another spoken test and then followed with a short exploration of Kyoto’s main river, Kamo, and my first taste of Taiyaki (a Kyoto pancake shaped like a fish and filled with custard) – my new favourite snack.

When I was younger, I used to live in Tokyo, Japan from the age of 5 to 11. Whilst I was there my parents threw me into a local Japanese speaking primary school from the age of 9 to 11. During my time there we used to take a lot of school trips to the outskirts of Tokyo. One trip included a long train journey to a tiny island connected to the mainland by a bridge. I really can’t remember the name of that Island or why we went there but one memory has stayed. As we crossed this bridge we were surrounded by these huge crow-like birds that were golden in colour. I couldn’t work out what they were at the time but they fascinated me as they were clearly birds-of-prey, but birds-of-prey are solitary so it really baffled me to see so many in one place.

What is so wonderful is that during our walk down to Kamo River, I saw these huge birds again. Swooping low and fast around us in amongst the crows. I was finally told that these birds are Black Kites. I was so happy!

I found out later that these birds are naturally solitary like any bird-of-prey. However, as time has passed, people in Kyoto (and obviously around the island too) have begun to feed them, encouraging them to swarm together unnaturally as it’s clearly an easy source of food. Authorities have tried to discourage the feeding of these birds but even as we sat there we saw a man throwing food high into the air whilst the Kites swooped to catch it mid-flight. Whilst this seems rather sad, it was still spectacular to see these beautiful birds so close. The end.

After I got back and did some food shopping, a few of us went to an all-you-can-drink bar. This concept blew my mind! The idea is that you can have as many drinks, one after another, within 2 hours and you only pay around £11. If we had these back in England it would definitely get out of hand but the Japanese don’t tend to drink as much as people in the UK so it can be managed well.

So far, I don’t think that it has really sunk in that I am going to be here for nearly 5 months. I haven’t felt that homesick or low. I’m also so proud of myself for getting here without having some sort of meltdown – which is usually expected of me. The only time I felt rather overwhelmed was when I found out that there was no WIFI in my accommodation and I couldn’t tell my family that I had arrived and was safe. Don’t worry, I eventually worked out that there is an ethernet cable and now all is well with the world.

That’s all for now. 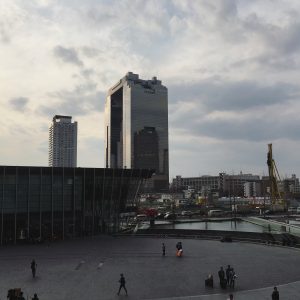 The view from Osaka Train Station. 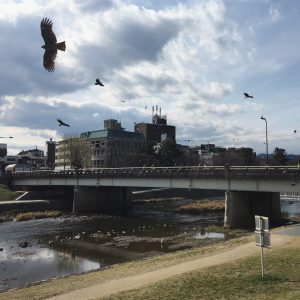 Perth, WA: The One Where I Do a Laurence Llewelyn-Bowen Impression
Just 5 weeks to go in Canada…