Since my last post, I’ve done three exams and some random bits and bobs to make the most of my last week and a bit in Adelaide. So here’s a list of random stuff I’ve done which isn’t work:

I ran into a friend who said a place – BRKLYN – was doing a free tattoo session for the evening to showcase an artist. When we got there we found out you had to already have a tattoo (that ruled out three of out the four of us), and you had to pick a design from a set of about a dozen, so that ruled me out too. We hung around at the bar, t’was a cool place, and chatted to some locals before I headed back to uni to work until the early hours of the morning. 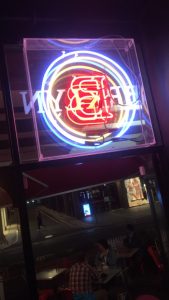 Went to a Halloween party as Sia, as I found a blonde wig, and there was a guy eating fire – he said he’d taken two lessons…very random! Then proceeded to lay on the street to watch the stars as we waited for our Uber and saw thousands of stars (and a shooting star). You kind of forget when you live in a city that there are so many stars in the sky because of the light pollution, but being in the hills, we saw all the pretty twinkling stars.

Okay this one isn’t that random but two bullet points seems a bit sad…. Spent the evening at the beach. Something I prefer about the coast here compared to the East coast is that the sun sets over the ocean, which makes for pretty pictures. 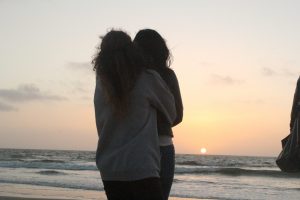 We went for a final flat meal to Grill’d and on the way home stopped at some cool angel wings graffiti which Yuki had posted a picture at the other day. 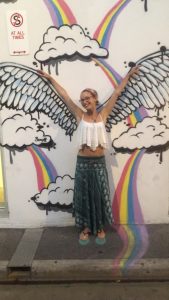 My wonderful American flatmate, Kay, left Adelaide the other day, and she leaves Australia tomorrow 🙁 Her parents took us our for a meal when they came to Adelaide at  lovely restaurant, and then the goodbyes came and I totally didn’t cry….promise… I’m not great with change and goodbyes so I’m not feeling this ‘having to say bye’ period whilst people leave for travelling and whatnot. Though, as much as it sucks, I wouldn’t change meeting these wonderful people, even if just for a few months. And now I have places to stay all over the world…! 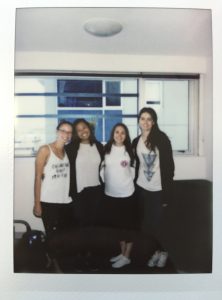 I finished exams yesterday, and Grai and I chilled on the balcony, but it was quite grey, so we thought we’d venture to the beach today as it was set to be sunny and 30+ degrees. However, rain became forecast so we only went to Henley for a few hours and whilst I took a walk along the pier, I saw some people at the bottom on a ramp and they were watching a seal lazily swim around! Supposedly this seal has been living by this beach for a few years and you can usually see them floating around in the sun, though usually you they don’t get so close! Got back from the beach and decided to head to uni to make the most of wifi and update photos and blogs etc. and since we’ve sat down a hail storm has just unloaded on Adelaide… very weird weather going from so hot to so wet…! 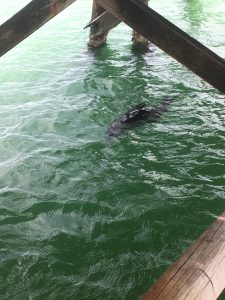 That’s the random highlights of the last few weeks! I’ve also celebrated friends’ 21sts, tried new restaurants for lunch/brunch to get a flavour of Adelaide before I leave, and have planned some final things to do next week. Now exams are done it’s time to do my lit review and book travel plans!

Perth, WA: The One Where I Talk About Real Life
The Last Few Weeks