Leaving home to study abroad, whether it be for a Summer program, a semester abroad or a year abroad, is an experience like nothing else. Although I had essentially ‘left home’ ten months earlier when I moved from the town where I had grown up to Southampton for my first year of uni, there is something more absolute about moving abroad for an extended period of time. My Semester Abroad was spent at the University of Adelaide, Australia, and therefore I knew when I said goodbye to friends and family that I wouldn’t be able to just go home and see them for a few days if I was unhappy. When I was sat at Heathrow airport it was hard to forget about this fear; that I had made the wrong decision and would be 10,000 miles away wishing that I had stayed in the UK, however, a few words of tough love from my parents and remembering the amazing adventure I was embarking upon soon changed this fear into overwhelming excitement. When booking my flights I decided to make my flight change at Singapore into a three day stay, as I had never been to Singapore (or any of Asia for that matter!) and felt that it would give me a chance to adjust to the large time difference while exploring a new city. This was the best decision I could have made. Not only was Singapore one of the most incredible places I have visited (the Gardens at the Bay are, quite simply, mesmerising) but wandering the city alone hugely built my confidence before I moved into my new Australian home.

Upon landing in Adelaide I took a taxi to my new home. I was lucky in that my accommodation contract began the day I arrived in Adelaide, and so I was able to move straight into my room for the Semester. I later learned that the majority of people couldn’t move into our building until the following day, and many had stayed in hotels and hostels in-between landing in Adelaide and moving in, which was a nuisance I was very glad to avoid! After being shown around and given all the key information by a member of staff, I was left alone in my room completely overwhelmed and feeling very alone. My room was also completely bare apart from what I had bought with me and therefore I couldn’t do anything until I had bought all the linen for my room; the last thing I wanted to do after a night flight and what felt like an eternity of travelling! Fortunately for me, a fellow Southampton student, Graice, who I had met along with two other Southampton girls (Phoebe and Sam) upon learning we were all going to Adelaide, had already been in Adelaide for a few days and so she came to help me buy all the required items for my room and we sussed out our new accommodation together which was really nice, although very tiring! Graice and Phoebe ended up being two of my really good friends in Adelaide, and I would hugely recommend to anyone studying abroad to make contact with other people going to your destination. Not only does it provide a bit of a comfort blanket knowing you are not alone when you arrive and that you already have people to talk to and hang out with if, for example, you’re in an antisocial flat, but it is also hugely useful in the lead up to leaving home. Graice, Phoebe, Sam and I had a group chat in the weeks leading up to leaving for Adelaide and it was nice to know that everyone was feeling the same way as me and preparing the same way I was. 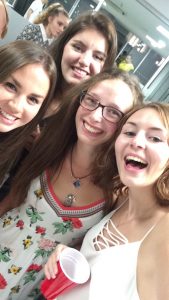 The week of my arrival was orientation week (or ‘O Week’) at the University of Adelaide for international and exchange students, and a group of us went to all the talks, all the while meeting new people who would eventually become firm friends. Although many of the orientation talks repeated what we already knew, and had heard before in Fresher’s at Southampton, I would still recommend going to them, just in case there is something important mentioned, and also because they ended up being quite social events! It was at these talks that we learnt about ESN – the Exchange Student Network. Run by students who themselves had returned from studying abroad, this network was great at organising social events for all the exchange students, such as quiz nights, bar crawls, trips to vineyards and even a shark diving weekend! With just a $5 membership, ESN provided numerous great nights for us exchange students so I would wholeheartedly suggest that anyone going to study in Adelaide joins up!

After the fastest week of my life, the real work began and university started but I will save discussing that for another blog!
Molly x

Arriving At My New Home