After six months in Australia, my studies in Adelaide finally drew to a close in November. I spent the following month travelling, then on Christmas day, I checked out of my backpackers at 9.30 in the morning, and spent the day sunbathing in a park. Not exactly a standard British roast dinner and Queen’s speech day! I left Adelaide on a flight to Dubai, then wandered around during a long transit period, sleeping only 2 hours on the last flight, and landing in Heathrow on the 27th. Thankfully I didn’t feel jetlagged, and my travels before leaving Australia has left me with many great memories. 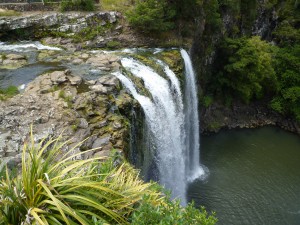 About a month before leaving Adelaide, I started my main travels. The first place I went to was Bali with a friend. We saw some amazing temples, monkey forests, beaches and did some surfing. From there I passed through Sydney to get to Auckland, New Zealand. I took a trip up north to Whangarei, and saw the Whangarei waterfalls. I then went to Waiheke island- quite a large island about a forty minute ferry trip from Auckland. It had some great walking trails, some interesting beaches and some great lookouts out to sea and of neighbouring islands. I also visited Rotorua and Waiotapu, two places of volcanic activity, where smoke constantly rises from water of 100 degrees temperatures, and smoke even rises from people’s gardens and drains in the ground! Here’s a photo of ‘The artist’s palette’  in Waiotapu thermal wonderland. Huka falls in Taupo were also very picturesque, with a turquoise coloured lake and a backdrop of mountains in the distance. 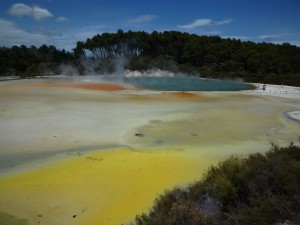 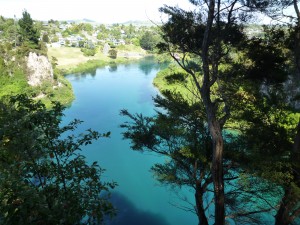 I went back to Sydney after New Zealand, and saw the Opera House and the harbour bridge with a Korean friend I met in my backpackers. I walked across the harbour bridge to get some great views of the Opera House, and visited the Botanic gardens, Circular quay, Darling Harbour, Luna park and a War memorial. Sydney is a more unique city than Adelaide in the sense that it is bigger, denser, and more varied, but it lacks the cleanliness and spaciousness of Adelaide. Canberra was my next destination- it’s worth a visit if you have the time. Although it is the capital of Australia, it has a population of less than 400,000, in comparison to Sydney’s population of over 4.5 million. Like Adelaide, this gives it a ‘cosy’ feel- it is clean and structured, and very attractive, particularly by the Lake Burley Griffin, and by the National War Memorial and the National Portrait Gallery. The centre of the city is a road that goes round in a circle. Although it’s easy to get lost in the centre of Canberra, it has a very homely feel, with the generally friendly, relaxed attitude of the locals. 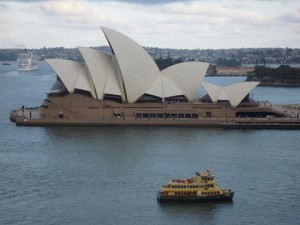 From Canberra I took a two hour bus back to Sydney, stayed there a few more days, and then flew through Adelaide to Port Lincoln. Port Lincoln is a town on the Eyre Peninsula in South Australia, and has just 14,000 inhabitants. Most people have never heard of it, but I had a particular reason to visit. The reason was that it is the best place to find Great White Sharks in the whole of Australia. Most people make a habit of avoiding the Sharks, but I wanted to do some Cage Diving, so I paid $500 for the dive, plus the $180 flights and the $140 accommodation. But it was definitely worth it! It was a long day- we spent 13 hours at sea, with a 3 hour trip each way to and from the Neptune islands, where we saw 9 Great White Sharks, and one would pass by the boat every minute or two! From above, the action was brilliant- we even saw one eat a seal, and the Shark thrashed about and slammed into the boat. But from the cage, the sharks seemed quite calm and majestic, and it was a great experience seeing them up so close. During my time at Port Lincoln I also visited Coffin Bay National Park with two friends- one from France, one from England. This was also a really scenic place, with white sand beaches and lookouts to the ‘Golden Island’. 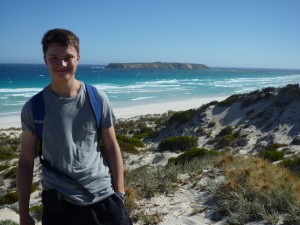 From Port Lincoln I went back to Adelaide for a few days, and stayed in a backpackers. Christmas eve involved a drink with a friend prior to watching the sunset by the River Torrens, which looks fantastic at sunset or at dark. Walking around the city and the University for the last time was a bit sad but it was nice to reflect on the great times I had in Adelaide. I and two of my friends from Adelaide already have plans for a skiing trip in Austria next year, and many of my friends have been asking me to visit them in America, South Korea, Brazil, and China. And maybe I’ll go back to good old Adelaide someday! I travelled a lot, but I know there’s still loads I missed, like the Kimberley, Darwin, Uluru, Tasmania and Brisbane. Australia is hugely different from place to place: city life compared to farm and country life, and the rainforests compared to the desert. But if I don’t return, I know for sure I’ll have no regrets about my time there! 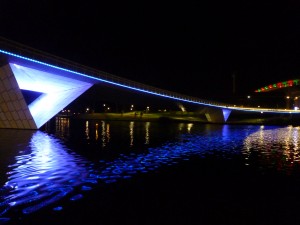 My name's Sam, I study English at the University of Southampton and am undertaking an exchange program at the University of Adelaide, South Australia. I enjoy sports, playing instruments and hope to become a Police Officer in the future, after doing a lot more travelling!