My name’s Edward Dunn and I’ve been in Potsdam (Germany) for about two weeks now and I am feeling very settled in. It’s strange, because I feel like the friends I’ve made here, the experiences I’ve had and the memories I’ve made are years old, but at the same time everyday blurs into one and feels like no time at all. For instance, I was getting on the plane to come here two weeks ago and I feel like that was another person, but at the same time I remember every detail so clearly, like it was moments ago.

I won’t lie or ignore the small details. My first day was horrible, I did not want to come. My boyfriend said goodbye to me the night before and all I did was cried because I knew how much I would miss him. Then my mum had barely anytime to say goodbye to me before she dropped me off at the airport and then our plane was delayed for an hour. Then when I arrived in Potsdam to collect the key to my flat, they had lost my contract and I thought I wouldn’t have a place to live. After a very stressful conversation with an office worker (who spoke no English), I managed to find my key and I took the bus with my friend Lizzy (also a Southampton student) to our new home. My first reaction when I saw my room was to cry. It was horrible, think Soviet Russia but dirtier. My walls were just white, the floor looked like a mix of plastic and dirt and my fridge was covered in mould. I sat on my bed, called my boyfriend and cried. After giving me a nice pep talk, he forced me to suck it up and go make some friends. So Lizzy and I went to get some food for our rooms and the shop happened to sell a rug (which just about hides my angry floor), which made my room feel homelier.

Then that evening, we had an Erasmus drinks reception for all the new exchange students and there I met my new friends. I searched the crowd and, shamefully, I admit that I sort out English voices. After the stress of my day, hearing others with similar accents to mine felt comforting and reminded me of home. Thankfully, after a few drinks I felt better and began socialising with a few others and from there I made some friends.

So far, I’ve loved my experience. I’ve managed to make a lot of friends who I have become quite close with. We can discuss anything from the daily news to my body shaving rituals and nothing feels forced. We’ve laughed, giggled and cried together, done some amazing things and created brilliant memories, but I’ve only known them for two weeks. I keep forgetting just how little time I have known them, and instead they sometimes feel like the only friends I have ever known, even though I am still in constant contact with my friends back home. I guess what I am trying to say is: it’s strange how a small group can bond so quickly and tightly when they leave behind all of their other loved ones and quickly have to make a new family.

That’s not to say I don’t miss my boyfriend, my family or my friends back home. I do- painfully so. There are days where the home sickness is quite bad, but that feeling encourages me to go out and explore. To not waste my chance to see Germany, Berlin and Potsdam. Rather than lying in bed and missing Matt, I can go to the Brandenburg Gate and eat currywurst (something I do a lot of), drink in cool pubs or restaurants or attend Hungarian film nights and it is amazing.

I guess, my main message to anyone about to embark on their year abroad is: don’t be scared. It is understandable why you would be and you’re certainly justified in being so, but hold in there. You will make new friends, you will see some amazing sights and you will have a brilliant time. Just take every opportunity you can, never say no and, as someone quite dear to me said, “life begins at the end of your comfort zone.” So push the boundaries, do things you would never usually do and have an adventure. Don’t focus on everything you’re about to miss, think about how you’ll change as a person, how you’ll grow and mature. Think about the drunken chats, the hungover moaning and the sober fun. Remember- you’re here to live in another country, so bloody hell, go and live it. 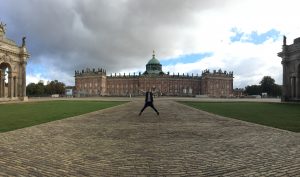