Can’t believe it’s been nearly 2 months since I left the sunny shores of Melbourne. It feels like ye

sterday I was sitting in a lab in Deakin University in Melbourne, Australia.

I left the UK in February with my cases packed making sure it included my Welsh flag, ready for my new adventure.

I checked into Heathrow, prepared for a long day of travelling on my own for the first time, but the flight had plenty of films to keep me entertained.

I arrived, and the first thing that hit me was the heat. Wearing leggings and layers of jumpers to make sure that my luggage was under 30kg (which was a task in itself!) but I should’ve been wearing shorts and T-shirt.

I knew Australia was warm but coming from a snowy and icy winter at home to the middle of a scorching summer was certainly a nice start.

A bus was provided to take me to my accommodation at Deakin which would be my home for the next 4 months. I shared a flat with 9 other students, 8 from Australia and 1 from Hong Kong. It was very different to my student accommodation at home. Used to a small cramped space, the large room with plenty of storage as well as our own washer, dryer and living room was a nice surprise. If I had known, I could’ve packed more clothes!!

One of the first things I noticed was how welcoming all of the Australians were. Moving to the other side of the world, even if only for a few months was a big ask and so their welcoming nature made it so much easier to settle in.

As tradition with a new semester we had 2 weeks of freshers, which was great fun. I learnt that ‘goon’ is a classic pre drink (wine in a bag) and that fancy dress was a big thing at Deakin. I spent many hours wandering through op shops (charity shops) for second hand clothing that went with the themes e.g. tight and bright, 80’s….

But not everything involved alcohol. We had many pizza and ice cream nights, outdoor cinema events and colour runs through the semester, not just during freshers. One of my favourites was ‘Food Truck Friday’ which is when different food trucks came to the student Village and we ate for free! Food varied from Indian to fish dishes to good old burgers. This was certainly better than having Vegemite on toast! 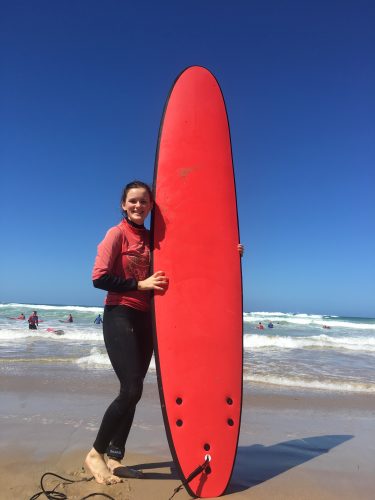 Deakin arranged a Beach Welcome weekend which was great. My first experience surfing in the Australian sea – which I wasn’t very good at but I gave it a go, as well as other activities such as mountain biking, yoga and many more.

I had come over to work however and the semester started and I was thrown in. One thing that I always found strange was that it was my 2nd semester but their 1st so it was just as new to me as it was to them. Two of my modules where 3rd year modules and I was a little apprehensive as I’m only in my 2nd year but the lectures where very different and everyone supported me if I needed any help. Very often only a few people attended lectures especially the 5-7pm lecture on a Friday night! The lab work was very different and didn’t involve any dissections – didn’t fancy having to dissect a kangaroo!! 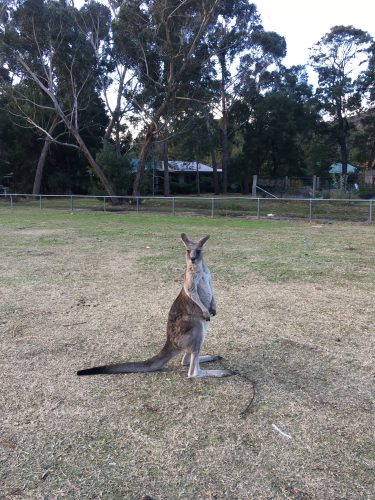 Over the semester I had many memorable experiences. I played and watched and AFL game – still not quite sure of the rules, saw many kangaroos and koalas and a few penguins – which is not what I expected to see in Australia. We went to the beach many times and although we only had a week off for Easter we managed to go travelling along the East Coast, visiting Sydney, Brisbane and the Gold Coast which was full of hype for the Commonwealth Games. We were classic tourist taking photos of the Sydney Opera House, Harbour Bridge and Bondi Beach! Thanks Dad for buying me extra phone storage for photos!! 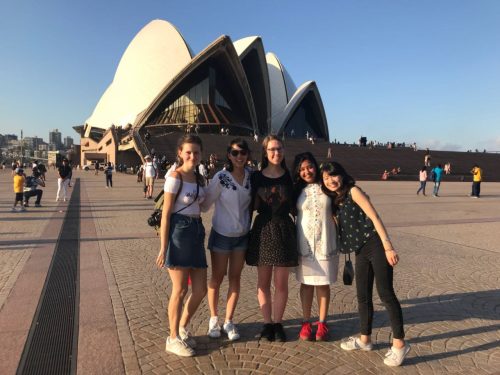 I made many friends, who I will keep in contact with whilst I’m home and had an unforgettable time in Australia. I was sad to leave and would’ve gladly stayed for longer but not sure my bank account would agree!!

My time Down Under!