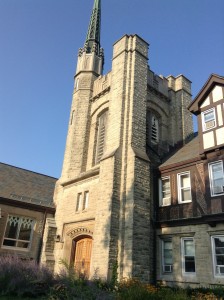 University in Canada couldn’t be more different from England if it tried. They refer to it as ‘school’ for starters, and it really is much more like school than what you’d expect from university. At Huron, you’re highly unlikely to have a lecture – at least not the kind where two hundred of you sit in a theatre and the lecturer teaches you all together. Instead, they have smaller classes of anywhere between 8 and 30 students (it all depends on the popularity of the course – my 17th Century Literature class has about 8 students on a good day, for example, and my class on Lord of the Rings and His Dark Materials has around 25 every time).

The way the classes work varies – sometimes the professor (and they’re all called ‘profs’ here, regardless of whether or not they actually have a professorship, and you definitely don’t call them by their first name!) will stand at the front of the class and lecture or do a presentation, sometimes there’s a presentation and then a class discussion, or sometimes the whole lesson is dedicated to a class discussion. Single lessons tend to last around 50 minutes, while doubles last 1 hour and 50 minutes. All the classes start on the half hour, and there are definitely some, er, shall we say, interesting class times! I have three days where my first lecture is at 8:30AM, and several of my friends have classes that run from 6-9PM!

The assessment styles aren’t too different. What the profs expect from your essays depends on the profs themselves, but from what I’ve handed in so far, what they expect is pretty much the same as at Southampton. A word of caution though – they mark a LOT more leniently here! So, while at Southampton a grade of 70% essentially declares you a genius, that’s the average grade at Huron. I got a philosophy paper back this week that proudly declared that I had a grade of 90%! I can safely say I’ve never been so surprised in my life!

How many essays and assessments you do depends entirely on the class. But each class tends to have two or three modes of assessment throughout eh term, and then all of them have an exam. Whether your module is just for the semester or the whole year dictates when your exam will be, and whether or not you have midterms. Each class is different; for two of my classes, there are two essays and then one in-class test, while another has one essay, a presentation, and a weekly blog. It’s all incredibly straight-forward once you get your syllabus, but there are two things that did throw me for a little while – some profs measure how long an essay should be in page numbers rather than word count, and they use the MLA referencing system rather than the MHRA. MLA is easy once you get your head round it, but it can be confusing at first. I’d recommend brushing up on it way before your deadlines, and then you’ll be fine!

Christmas exam period takes place in the last two weeks of term. This year, it runs from the 9th to the 19th of December, and then the last day of term falls on the 20th. I was pretty alarmed to discover that some exams run on the weekends! I’m very lucky that I missed out on these, but I do have one that runs from 7-10PM on the night before I fly home!

Life on campus is certainly something to behold. It’s always incredibly busy, and always a sea of varying shades of purple (school pride isn’t just restricted to events. You’d be having a very strange day if you didn’t see at least a third of the students wearing some form of Western memorabilia!), especially around meal times. There is always, always an astoundingly long queue for coffee. Tim Horton’s (Canada’s pride and joy), is always busy, regardless of the time of day (no, seriously, I’ve seen people sleepily queuing for coffee there at 11PM!), and while I can’t say that it’s the best coffee I’ve ever had (not that I’d dare say that to a Canadian!), it’s cheap, and they have the most wonderful sweet treats ever invented anywhere – Timbits. They’re essentially tiny doughnuts of joy that come in dozens of types and flavours, and in surprisingly large quantities. When I first arrived, I thought the option to buy 10, 20 or even 40 Timbits was ridiculously excessive. But now, you should trust me when I say that it most definitely is not. No, really. You’ll see what I mean when you taste them!

Cycling in the Atacama Desert
London (Ontario) to New York