Whilst studying abroad at Penn State I took up the opportunity to get involved in one of the most recognisable, albeit mysterious, parts of the American college scene….. Greek Life. Joining a fraternity was an incredible experience and allowed me to get involved with many different activities on and off campus.

Joining a fraternity can definitely be a large time commitment, but it was definitely worth it despite the fact I was only able to be an active brother for a year. However, as brotherhood is for life, I will always have somewhere in Pennsylvania to call home.

In general there are 4 stages to fraternal life:

Rush is about a 10 day period each semester where fraternities are allowed to recruit new members to join. It is also one of the few times in the year when anybody can come and look around the various fraternity houses around campus and generally find out more information about different fraternities. At Penn State this is split into 4 “zone days” because of the sheer number of fraternities, there are over 40 chapters. Almost all of the chapter houses around State College (because most are off campus) are pretty impressive and I would definitely recommend that future exchange students take to opportunity to go and check them out. Rush is in incredibly important time for fraternities as recruiting new members can be incredibly competitive (as with most things in greek life), so the chapters make a real effort to make the best impression they can. Also you never know, I went to rush week just to see what the deal was all about and wasn’t really set on joining a fraternity at all.

Following the initial open day period there are usually a few smaller networking-style events where chapters invite back rushes that they are interested in inviting to join, these can range from relaxed cook-outs to being invited to a more formal brotherhood dinner. This can be a stressful period, especially for american kids who are completely set on joining a particular house, but it really isn’t that bad and definitely helped me to get better at networking and gave me a lot of practice at dealing with the “oh, you have an accent” line which you will get A LOT (or at least i did). I was fortunate enough to get a bid from a house, despite “suicide rushing” which is where you only go to one houses’ rush events. 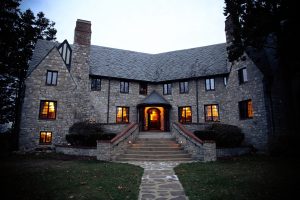 The best house in State College

If you choose to accept you bid, then you become what is officially known as a new member of the fraternity. Officially, this is a probationary period where you are gradually imparted with “secrets” and learn about the history and traditions in preparation for your initiation. This is when you really get to know the rest of your membership class, most of my class I would now consider some of my best friends, along with the rest of the fraternity.

New members are highly encouraged to get involved with events within Greek Life and I got the opportunity to really go out my comfort zone by taking part in both the Homecoming Parade and Greek Sing. Homecoming is essentially a huge party weekend, centred around ex-students coming back to celebrate Penn State. Taking part in the parade was an incredible experience, especially as we placed 2nd overall. However the downside is that being in the parade made it quite difficult to take any photos of it for this blog. 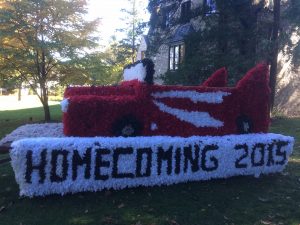 Our Grease Lighting themed float after the parade

Greek sing was an …. interesting experience and is definitely something I wouldn’t normally get involved in (and some of the other performances suggested I’m not alone in that regard). However it was a great experience and allows me to get to know people from different fraternities and sororities. The performance was also pretty fun in the end and placing 3rd overall meant all our hard work was definitely worth it.

The end of the new member period was quite a surprise, I didn’t realise that I was about to be initiated until it started. However, fraternities aren’t called secret societies for no reason, so there is really only one way to find out what happens during initiation. Initiation is probably one of the most magical moments in anybody’s time at a fraternity and finally being able to call yourself a brother of the chapter is just incredible.

Being an active member (or brother) is probably the most fun part of being in a fraternity. There is much more freedom to take part in the different aspects of fraternal life. Often I just found that the chapter house was a great place to go and hang out when I wasn’t studying.

The social aspect of fraternal life is another huge plus side and almost every weekend there would be some sort of social event going on. These can range from sunday morning brunches with a sorority, to brotherhood tailgate events for Penn State football games, or even one time an impromptu late night brotherhood laser tag game.

There are also more structured events, such as being expected to help the chapter raise money and prepare for THON. To put it simply (because to explain it properly would make this blog much longer than it already is, the 2016 Promo video is pretty good though https://www.youtube.com/watch?v=z-Bk09yXVBo it is the one of the largest student organised philanthropy events in the world that raises money for children suffering with cancer. The annual fundraising cycle culminates with a 48 hour dance marathon, which any student organisation (greek or not) can nominate dancers to participate in. Almost anyone who you speak to about THON will tell you it is one of the best things they have ever experience and I am no different. I could only attend as a supporter (many of whom stay standing for the entire 48 hours along with the official dancers) and the atmosphere was just incredible.

Officially becoming an alumni member was quite a sobering experience. It really signified the end of my exchange in many ways, as it was time to say farewell to most of the people who helped shape both my year abroad and me as a person and to whom I will always be indebted.

Joining a fraternity is a decision I will always be proud of and I would definitely recommend it to any future exchange students.

Perth, WA: The One Where I Go Upside Down
Blogging no Brasil: Episode 1

2 thoughts on “In the Bonds: Experiencing Penn State’s Greek Life”