As I am starting to near the end of my year exchange at Penn State, it time to start reflecting on what has been an incredible year.  I the following series of posts, I hope that I can convey some sort of feeling of what it is like to be a Penn Stater – albeit a temporary one.

When I set first set eyes on Beaver Stadium (which is currently the 4th largest stadium in the world) I was awestruck at the role that the athletics program plays at Penn State. This pride is most evident in the levels of student support for the PSU sports programs, this is not uncommon in the US where college sports (especially football) are televised across the nation. Comparing this to Southampton, where a crowd reaching into the double figures would probably be considered a decent turnout, it is just unbelievable. Even the rivalries with other colleges are taken to another level, especially Michigan U – who still suck.

Football game day is quite simply an experience like no other and American football is very deeply ingrained part of the sports culture in PA. Campus facilities shut down and studets, alumni and what feels like the majority of central Pennsylvanians descend on Beaver stadium for every game. Each matchday is much more that “just a game” and tailgate parties start well before each match. In many ways tailgating is more of an event than the actual match itself. The many parking lots that surround the stadium are transformed into a sea of RVs, grills, beers (considered one of the more integral parts of any gameday) and “traditional” matchday games. The games range from the basics, such as cornhole, to the frankly barbaric game of stump, which consists of tossing and catching a hammer before attempting to hammer a nail using whatever grip you caught the hammer in.

By far the best aspect of tailgating is the real sense of community that you can find, as people of all ages and walks of life come together to support the Nittany Lions. Gameday morning may start off as a loose collection of individual parties, but they soon conglomerate into one massive celebration of Penn State. You often find yourself meeting many people you’ve never seen before (and sometimes people who are unfortunate enough to go to different schools). This sense of unity sets the stage for kickoff, by which time most of the crowds vocal chords are suitably lubricated. This is where Beaver stadium really comes into its own. Despite is vast capacity you still get a sense of intimacy, especially in the student section. 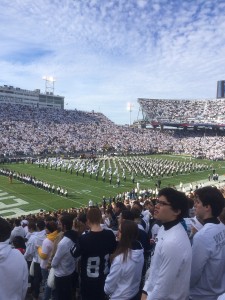 The atmosphere in the 21,000 strong student section is incredible and really defines what it means to be a Penn State student. This is compounded at the last home game of the season, where the entire crowd (with the exception of a few stubborn Michigan fans) dress up in white for the match.

This sense of pride extends to all facets of the Penn State community, from freshmen through to alumni who graduated years ago. The sheer enthusiasm for being a part of the college is inescapable, within a few weeks I was catching myself referring to Penn State as “we” and “us”.

If God isn’t a Penn State Fan, then why is the sky white and blue?