Hi everyone! I’m Christy and I am now halfway through my semester abroad! 🙁 Two months ago, I flew across the globe on a 12 hour flight to Hong Kong – I was nervous and very excited at the same time! Here’s a brief insight into what I was up to at The Chinese University of Hong Kong.

The orientation was actually stretched across 3 days, the first being the introductory session. On arrival, there were about 500 of us from around the world who gathered in the common area outside the auditorium. We were all keen to mingle around, but before we knew it we were escorted into a massive auditorium where we were greeted by the lovely Vice Chancellor of CUHK, Mr Rocky Tuan who gave us a very warm welcome.

The orientation was very informative where we learnt about the history of the university and the fact that CUHK is one of the most prestigious universities in Hong Kong! We were also given some useful advice on transport around the city and a session on basic Cantonese which was a lot of fun.

The following day it was finally time for the highly anticipated city guide tour of Hong Kong. It was a one hour drive to our first stop – Stanley Market, famous for its traditional street markets and local food. During the drive, our tour guide told us what it would be like living in Hong Kong, the living conditions known by the iconic imagery of the ‘concrete jungle’, the real estate bobble and conflict between ‘Hong Kongers’ and the ‘Mainland Chinese’ from China. We had a great time exploring and being entertained by local buskers in Stanley.

Next stop was Victoria Peak! En-route to Victoria Peak, we drove past Mr Lee’s (richest man in Hong Kong/Asia) mansion which seemed like a less majestic white-walled Buckingham Palace. We had a relatively short time there, just enough time to give us a few snaps! 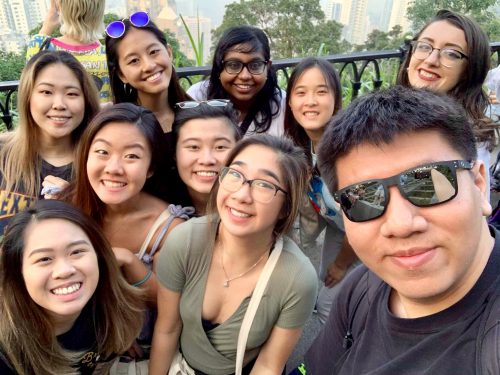 We left the Peak by dusk, ready for the night tour of our final  destination Victoria Harbour. Funny enough, awhile into the journey, the bus became quiet and was intensely filled with murmurs of music seeping through the earphones of us power nappers. When we arrived, we were a bit disappointed to see a grey half-blocked skyline, unfortunately the thick fog has paid its reoccurring visit again. We finished the night with a nice meal at a local restaurant within the area. It was a very enjoyable day.

The last of the orientation events drew to a close with a fancy dinner on Sunday. The dinner was joined by leaders of the 9 colleges as part of the university as well as exchange coordinators and of course the President of CUHK. I was very excited to try the exquisite taste of Hong Kong cuisine. We learnt the significance of each dish and the Chinese dining etiquette. Our table also won a bottle of Rosè wine in the lucky draw which made the night even better! 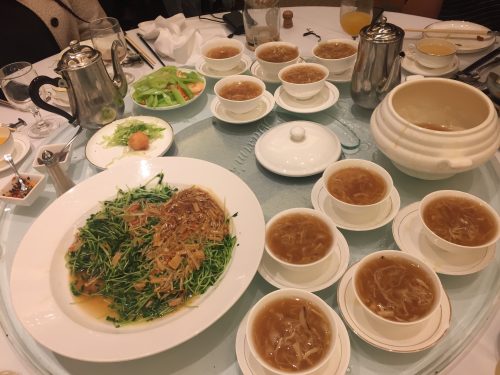 Lectures and Food on Campus

When I first arrived, I was overwhelmed by the size and terrain of the campus and it took me awhile to get used to navigating around campus as everything was quite literally on a mountain. We had to navigate around by the free shuttle bus service which had 8 routes in total. Lectures here are also structured differently, they are more condensed so we would only have to go in once a week for each module but for longer hours.

And of course the food on campus is amazing! They have over 20 cafes/restaurants which serve local dishes to western food and even a very affordable dim sum place! So food is never a problem on campus.

Recently, I went to the famous Feast for a Thousand dinner organised by Shaw College for their anniversary. It was a lovely gathering for Chinese New Year where we had Poon Choi, a traditional Chinese dish commonly eaten during New Year’s. In addition, we had great entertainment from professors, student bands and local celebrities, the atmosphere was very lively like your usual karaoke night at Stag’s but bigger and better!

Hong Kong also has great beaches and nature hikes. We escaped the busy city life for Big Wave Bay, best known as surfer’s paradise. It was a quiet day for the beach as it was still winter in Hong Kong so it was perfect to relax and chill. We also went on a mini hike along the coast looking down on the beach during sunset which was very scenic.

All in all, Hong Kong is a fascinating city in the heart of South East Asia. My friends and I have also been travelling and have just returned from Taiwan and Singapore, we have one more city planned for the remainder of our exchange and cannot wait to explore more of Asia! 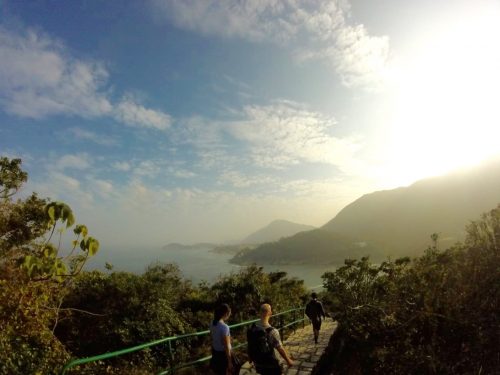 2 thoughts on “Hello from Hong Kong!”