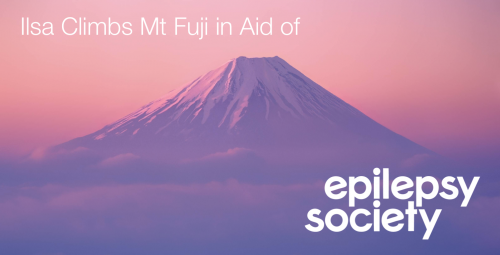 I don’t want to be a fool so I’m only going to climb it once. Unlike my dad who has climbed it 5 times! I am really unfit, so this isn’t going to be easy but no-one ever said it would be. The struggle that I will only suffer through for less than 24 hours is nothing compared to what people with epilepsy have to face everyday.

I have met some amazing people since I’ve been here and one person in particular has been diagnosed with epilepsy whilst being on their year abroad here. Olivia has not only had to deal with their diagnosis but has had to deal with the ‘culture of shame’ which surrounds all disability in Japan. Despite this, she is still on her year abroad and continuing to travel, proving that her diagnosis does not define them.

The following is an interview which I did with Olivia so that she could explain in her own words what being diagnosed with epilepsy has meant to her.

When were you diagnosed with Epilepsy?

I was diagnosed on the 7th February 2017, after experiencing my first known Tonic Clonic Seizure on the 21st October. I know it was then because it was exactly a week before my 3rd anniversary with my partner. It was a bit of a stressful time as well, as I had been trying to negotiate with immigration in Japan to get my Visa. The stress of it all obviously had something to do with it.

It’s interesting that it all seems to have started at the same time you started your year of study abroad.

Great timing eh? The doctor says that it could have been going on for a lot longer but it has only just become really apparent.

Does that mean that you might have had a few seizures before your first known Tonic Clonic Seizure?

Quite possibly. They can be really elusive sometimes, it is actually really difficult to spot. Not all seizures are the same. Most people think of a Tonic Clonic Convulsive seizure when they hear the word. But there are a lot of elusive types of seizures which you wouldn’t think to look for.

What do you do to help your diagnosis?

I take an anti-convulsant medication called Lamotrigine. I had to start off on a very small dose because of the side effects – they can be quite debilitating. But I am now on 200mg a day, so hopefully I’ll see a difference soon. There is nothing I can do apart from get the sleep I need and live as much of a stress-free life as possible. Which, as a student, is unlikely to happen.

Would you say that stress is a contributor to your seizures?

Definitely. At first you’re anxious about having a seizure and then if you have a seizure you get stressed and annoyed with yourself about it. It’s a vicious cycle.

What does the word ‘Epilepsy’ mean to you?

It’s a difficult question to answer actually. If you had asked me that questions a year ago, I would have thought ‘I’m really lucky it doesn’t affect me.’ Although I may know some people that have the disability, It would never have occurred to me that in just years time I would be somebody that has epilepsy. It doesn’t define who I am. It is a feature, if you like, a malfunction.

How has your diagnosis affected the way you live?

Well, as I am studying in Japan, I live alone mostly, although my friends are in the same building. I am alone in my very small apartment most of the time so, I have had to consider my safety. I have had to question my independence a couple of times as I am a bit of liability. If I was to fall and hurt myself fro example. In general, however, I try not to let it get in the way too much. I don’t want it to determine what I can and can’t do too much.

Is there an example that you can use to demonstrate how it has affected your day-to-day life?

I can’t do things that I would have done before, like go clubbing, watching films with flashing lights. There are a lot of things that I have had to re-think. The most significant thing I can think of is the time I had a seizure on the stairs. I was fortunate enough that it only left me with a bump on my head and a rather large bruise on my back. It could have been a lot worse, but it is things like that worry me.

What has been your worst experience?

It is hard to some-up really. There have been a string of experiences. My memory loss can be quite embarrassing. I find myself repeating what I have said and forgetting where I was going with a sentence. I have struggled to find basic words in conversations. With friends I’ve learnt that it can be amusing but it’s always tough.

Living in Japan poses a lot more challenges than it would in England. I’ve said a lot that having epilepsy in England and in English would be hard enough but now I have to have it in Japanese. It can be a little bit humiliating having to explain what epilepsy is in a country where disability is a huge taboo.

Overall, one experience that does stand out is the EEG (Electro Encephalogram) test that I have had done twice. It’s designed to be stressful and provoke a seizure so that they can see if it is caused by epilepsy. Naturally, I didn’t enjoy it. However, it did lead to my diagnosis which has meant that I can move on with things and hopefully things will improve.

What would you like people to know about your diagnosis?

The first thing is that I don’t want people to say ‘she’s epileptic’. Yes, I have epilepsy but it is not what I am. I’m also a student, a lady, a girlfriend, a friend etc. Particularly thinking about Japan, I think it i important that it does not carry the label of ‘mental illness’. It’s not really an illness as such. It does not affect me all the time. I am not sick but now-and-then I will malfunction. It would be great if the taboo could be decreased in some way. It doesn’t affect me all of the time; you don’t have to wrap me in cotton wool. However, it is okay to ask me ‘are you alright?’. In the beginning it was nerve-wracking when someone would ask as I would think ‘did I just do something ridiculous?’. But it’s good to know that someone is looking out for you.

People shouldn’t be afraid to ask me questions about it. It is very personal and I’m still only learning myself as it is still really very new to me. However, I wouldn’t be angry or frustrated if anyone were to ask me a question, even without invitation, they shouldn’t feel shy to ask because epilepsy can affect anyone at any time – it doesn’t discriminate. I think it’s important for people to have more of an understanding of it. I would rather people knew more and were able to help if I’m having a seizure.

After only knowing Olivia for a few short months, I have become so proud of all that she has achieved. I hope you can show your support by sparing a little change or the price of your next pint. No one should be embarrassed of their disability and should have access to the support they need.

I want to thank everyone personally for all the donations so far – they have meant the world to me and Liv.  If you wish to donate you can do so here.

Blogging no Brasil: Episode 10
Studying in the USA: One Year On