I haven’t written a blog in a few weeks so I thought I’d use this as a revision break:

I’ve spent more and more time working; on my lit review and starting revision for exams as my first one is on November 5th. Between work though, we’ve got up to some fun things in the sunshine – though it’s been a lot more grey/windy/cloudy/cold/rainy/miserable/awful/not-australian than what we signed up for…not that we’re complaining -_- . We spent an afternoon on the beach, at Glenelg again, and got frozen yoghurt, and I went in the sea for the first time since being here…it was freezing…!

Two days later a group of us gals went for cocktails at a cute bar I found called La Boheme which had a French interior and live music, as well as 241 cocktails which were very tasty! The snapple pie had cinnamon burnt onto it which was impressive to watch – I took a screenshot of a video of it which mostly shows it! Becky’s birthday was extended over a few days as we all quietly sung her happy birthday in the hub (to her embarrassment) before we had a super fun stats lecture. That night a load of us gathered in her apartment and surprised her when she came back from a birthday dinner as she was so shocked, bless her! There was more cake and wine and brownies and a few of us ended up staying up late listening to 90s/00s tunes.

Two thursdays ago we had a girls cheese and wine night which was so much fun. Every gal had an item to bring, mine was blue cheese (I had to ask what was good blue cheese…), and it was byob. Kayla also made sweet potato casserole which was so good! – a typical Thanksgiving dish; as well as Kayla, Pops and Lindsay making a timtam cheesecake which was heaven. After lots of dancing and more drinking a group of us headed out to a standard night at the Duke. 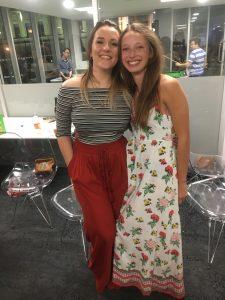 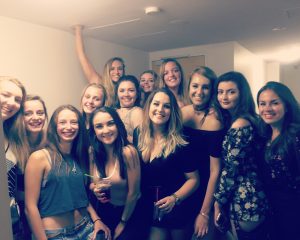 On Friday we all went out for Becky’s birthday and got free shots and pitchers and drink cards from Super Cali. I was super lazy on the weekend, though I did go for a walk at night whilst there was a Zombie Night Walk, so had a guy come up to me with yellow contacts in which was weird. Also spent a few hours lazing on the balcony with people just enjoying the sunshine, though it was very windy. 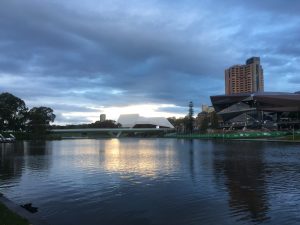 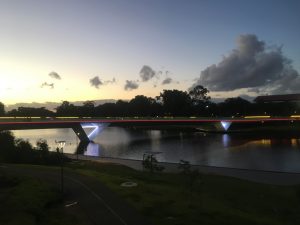 Last week there were goodbye drinks for exchanges leaving this semester which had free food and wine. A lady gave a short but sweet speech reminding us to be nice to people when we returned back to our home countries..! Spent two days working on campus till late to make up for the unproductive weekend, spent thursday at the Duke and had a lazy Friday making a cake.

On the weekend we actually ventured outside of Urbanest/campus and a group of us (Grai, Molly, Pops, Kayla, Chloe and Lindsay) went to Morialta where we did a walk around the conservation park and saw the waterfall. We saw a koala with a baby which was sweet; and then ended the day at 50SIXONE – a dessert place which does very impressive milkshakes, though I opted for my favourite cocktail – an espresso martini.

The next day, Grai, Molly, Pops and I went to Mt. Lofty. We missed the stop for Waterfall Gully, so got off later, then took a shuttle to the top of the mountain. We then started the 3.5k hike down to the Gully before turning and coming back up – for a 7k hike I really liked it, Pops seemed happy…but Molly and Grai did not like the steepness at all, was quite amusing haha. We also saw two wild kangaroos which was very exciting. We aimed to watch the sunset but had to wait an hour and it was freezing..! As we were trying to figure out which bus to take back, which would involve a 2k walk down the mountain in the dark, a kind stranger offered us a lift back to town as he was heading that way. Michael (the kind stranger) had actually met one of us before – Grai and him had spoken at the airport before spring break, it’s a small world!. As soon as we were dropped back at Urbanest, we headed to an Indian place and completely filled ourselves up before crashing. 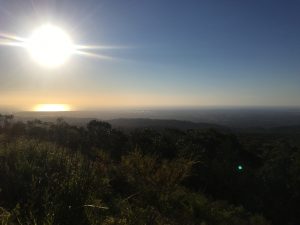 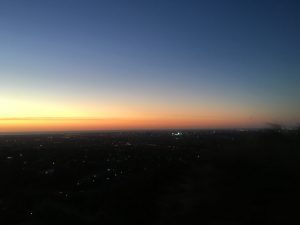 I went to the gym this morning, did some stats revision, and now writing this. I’ll do some more lit review work after and then a group of us are heading to the Botanical Gardens to get some nice pictures given the sun is out!

I can’t believe I’ll be back in England in under 7 weeks… time has flown by and I don’t want to leave…but at least I’ve been ticking off things to do whilst in Adelaide!

The past few weeks