Into the second blog post already, the time is flying! I thought I’d cover just a few things I’ve been up to and what’s surprised me over these past couple of weeks in the run up to Reading Week.

Yes they had more exams in store for me! They spread over quite a time scale, from the week before Reading week across to the week after. Luckily I have half of my exams before and half after.. phew! Exams in Canada are well, a bit weird if you ask me. Firstly, you could be that poor sod that has to sit an exam at 9 am on a Sunday. Yes you read that correctly… SUNDAY. That’s because in order to squeeze everyone in they make people sit exams on the weekend. Let’s just take a moment to appreciate the fact that in England, or at least Southampton University, they do not do that (protests would most likely happen). Also, for most of my exams I have been strictly required to write them in pencil. Maybe its just being in Geography, but I don’t think I’ve ever sat an exam in pencil except maybe year 3 maths. Luckily I brought a trusty old pencil with me- it hadn’t ever been used in all the time I had it I might add.  I could be the weirdo here but that definitely caught me by surprise.

Yes they really do call it “Rez” like its some urban district downtown where all the cool clubs are at. When I say halls I just get mocked for sounding like Emma Watson. I live in “London Halls of Residence” which is designed for Upper-Year students and exchange students- appropriate. It’s lovely, the staff are super friendly and the facilities are exceptional. We have common rooms, meeting rooms, study rooms, music rooms, a computer room, a gym, laundry room and even a grand hall. And people use these things all the time, unlike the deserted common rooms in most Southampton Halls. The residence committee made up of voluntary students living here (including my flatmate) put on lots of fun events that usually involve a lot of free food. These past few weeks we’ve had a movie night, Chinese New Year celebration, pet therapy (where they fill a room with puppies and you just play with them!) and a kickboxing class. The Kickboxing class was definitely a highlight- and something I’m taking up!

Now I can’t discuss halls without the obligatory “flat tour”. I don’t know what is so appealing about them but they’re always interesting. Plus for any possible exchange students, the residence photos of the rooms etc. on the halls websites aren’t that clear.

So there you go, a few shots of my living space! And yes it is a little stark since I could only bring two suitcases (clothes taking priority!).  How much Western University memorabilia did you count?? And yes, the map of Canada on the wall is mine…

Snowfall has been pretty crazy recently. London had a huge fall of Lake Effect snow in the space of about two days. For surrounding regions like Toronto… nothing. It’s a weird phenomenon we experience thanks to the cold, moist winds off of Lake Huron. Sorry, I had to squeeze in my Geographer bit there.  Basically, ITS DEEP. And for poor old Tash, who thinks she’s Buzz Aldrin every time she wears her snow boots, getting around has been interesting. Just so you have an idea: 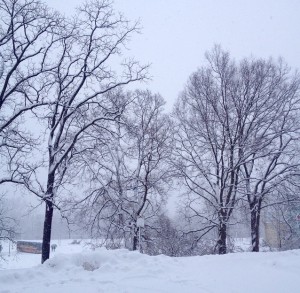 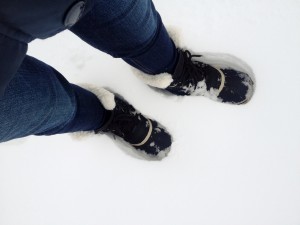 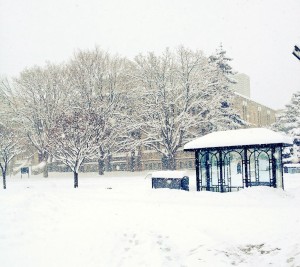 Yep, it’s as cold as it looks. -21 degrees C usually. Brrrrrr. I can’t say its not beautiful though. Looking around the scenes are quite breathtaking. Not for Canadians though. In fact, they complain about snow far more than I expected. “Urgh its cold”, “man I hate the snow”, “Oh great another ten layers to put on today”. No they aren’t quotes from me, though I have been known to say them, they are from Canadians! I can’t say I don’t blame them, the novelty has most likely worn off after 19+ years and since, unlike the schools, Uni doesn’t close on days like this it can be a bit of a downer (especially on a Sunday morning before an exam). I’m appreciative of it though!

I haven’t got much more to add, the weeks running up to Reading Week have been quite quiet. I’ve been to a little concert held by students on campus which had a great vibe and was lots of fun and generally hung out with friends, and continued to meet new people! Many plans are on the horizon for adventures, but these past couple of weeks have been exploring local wonders!

My exchange experience down under
The End of the Australian Adventure