I’m in France for my Year Abroad and I usually find myself writing up the week’s worth of events which normally contain at least one stupidity. But hopefully the foolish things that I get up to will be amusing for you too. So here goes!

Yes, we went to Mcdo’s for a McFlurry and whilst that was very exciting it was only a build up to the afternoon’s treat in store. We, Sophie and I, being the responsible adults that we are, have decided to get some fish. And not eaty fish either; these are swimmy fish. We’ve been considering it for some time and finally took the plunge to buy the bowl, food and of course some pretty stones and plant for the fish to play in.

We bought two fish, now named Olaf and Merlin (of course not anything to do with our two favourite film/TV characters), who apparently are not at all keen on swimming or eating or being very good at being fish! But I fear we might have had something to do with that. You see, when we got them, the shop gave us no advice whatsoever on the care of our fishy friends (apart from telling me I was holding the empty bowl incorrectly) and so we returned to the house with only our previous experiences to go on. We tried to be very considerate, leaving the fish still in their bag but inside their new water to adjust but seeing as we were going out to the cinema later, we didn’t want for them to stay cooped up in a plastic bag for too long, and decided to let them out before we left. Not having the fishing net that was used in the shop, we thought the next best thing would be to use the mini-sieve that we use to stop the lime scale from the kettle getting in our drinks.

With Sophie holding the bag and me, with one hand holding the sieve, the other covering the sieve and fish inside, Olaf made the short journey from bag to bowl without too much ado. However the same cannot be said for that of Merlin, who unfortunately for him got a little more acquainted with the kitchen than we (and he) would have liked. Whilst I had one hand on the sieve and another covering the fish, Sophie’s hand was not holding the bag, thus said bag decided to tip its contents (fish poo and all) over our plates, cutlery and kitchen in general.

Naturally reactions meant that I reached out to grab the bag to stop it emptying, but this meant Merlin was free to attempt his escape and as such flapped out of the sieve and onto the work surface. Trying to pick up a flappering fish is no mean feat and after a short while (but what must have seemed long for poor Merlin who was sans eau), he was eventually reunited with Olaf in his snazzy new bowl.

Whilst we were more than slightly panicked for his well-being, Merlin sat (if fish can sit) very still, at the bottom his new home and for a few minutes we thought he’d snuffed it. He perked up after a while and the two of them were swimming around contentedly, as they were later that evening. Yet today, they haven’t eaten their food, nor have they been terribly active; my only hope is that we can’t have caused them premature death when we’ve had them for such little time!

It’s a bad photo, but it also seems the fish are somewhat camera-shy, but Olaf and Merlin are still visible and more importantly not floating on the suface for the time being! 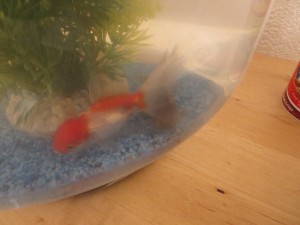 One, two, three, four, five; Once I caught a fish alive!

Spring has sprung!
To bise or not to bise, that is the question!