October has been without a doubt my favourite month so far, the weather is finally heating up, so the sunny, idyllic Brazil I had in mind before I came is now living up to my very optimistic expectations. I had loads of trips planned for this month and I feel very settled in Floripa now. At the beginning of the month my friends and I planned a trip to Blumenau for Octoberfest! We have one in Southampton but it not a patch on the one here, which is actually the biggest Octoberfest outside of Munich. It was very weird experience to say the least! Eating pretzels and drinking beer whilst watching a typical German parade seemed so out of place in Brazil. (But I wasn’t complaining)

The following weekend I was very lucky to have the opportunity to go to Santiago in Chile to meet my parents, who I hadn’t seen for 3 months. (Felt more like three years, for those who don’t know, I’m a massive softy). They came out for two weeks of which we spent 4 days in Santiago, 4 in Floripa and 5 in Rio! Santiago was a lovely city, but freezing. I brainlessly turned up in shorts and t-shirts and was unpleasantly surprised when I got off the plane to icy winds. On the first day we climbed up the San Cristobel and were greeted by amazing views of the city. If you ever have the opportunity to go you really should, as it’s the perfect way to see the whole city. The next day we took a bus to the seaside town of Valparaiso, it only takes an hour and the town is home to a UNESCO world heritage centre and it’s very pretty to look around, although not loads to do, so one day would probably suffice.

When we came back to Florianopolis I wanted to show my parents the best parts of the island. We did hikes such as ‘Lagoinha do Leste’ and ‘a Trilha de Naufragados’ where we followed by a group (tribe?) of inquisitive monkeys; this thrilled the ‘pais’. On Tuesday morning we flew out to Rio and spent the afternoon dawdling down Copacabana beach, watching the surfers and sipping Caipis (Caipirinhas, i.e. lethal Brazilian cocktails). On Wednesday we went to the botanical gardens that were right up Mum and Dad’s street, a little less up mine, but I enjoyed it nonetheless. On Thursday I met up with a friend, we packed in loads and managed to get up Christ the Redeemer and Pão de Açúcar (Sugar Loaf mountain) all in one day! Being at the top of Pão de Açúcar and watching the sun set with a cold ‘antarctica’ (cerveja) has been one of the most memorable moments of my trip here so far. It is honestly the best view I have ever seen and probably ever will see. Well worth it. The next evening another one of our friends got into Rio and we all went out for drink in Lapa, which is the ‘beating heart’ of Rio, according to my ‘carioca’ friend. (Carioca being someone from Rio)

The next day I had to bid farewell to my parents and headed back to Florianopolis, but it didn’t stop there! I had about an hour to get ready for an international student boat party in the north of the island that I was going to with friends from uni. Swimming in the clear water and drinking catuaba (a drink made from plant extracts from the amazon rainforest) off a tropical island with all my amigos was the perfect way to end October. Bring on November! 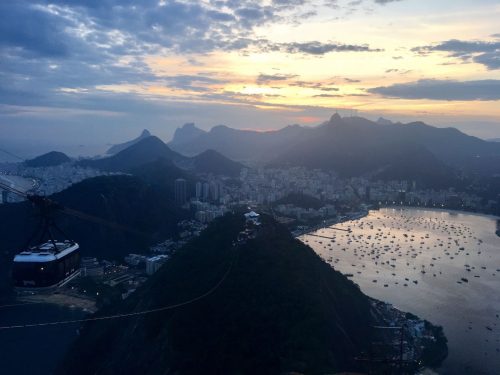