Arriving in Taipei I was greeted by four days of solid rain… and running green-men on the lights at crossings! I spent these rainy days more locally, catching up on art galleries, which I had missed in Osaka due to all the new year closures. I had also heard a few years ago that Hou Hsiao-hsien, a legendary Taiwanese director and personal favourite, established a cinema in Taipei so I was eager to find this, and catch up on cinema during the rainy nights. I managed to find it, the SPOT cinemas (I visited the Huashan branch, part of a nice but pretty kitsch art complex) and for the next four nights of rain I visited the cinema. I saw a nice balance, two Asian films Old Beast (Chinese) and The Great Buddha+ (Taiwanese) and two European films The Killing of a Sacred Deer and The Other Side of Hope. I would recommend them all, apart from, sadly, the Taiwanese film which didn’t explore anything of interest for me. It was greet to be in a wonderful cinema again, but it made me quite jealous that I am yet to find one this good in Seoul! I also stopped by the cinema’s shop and managed to pick up two Taiwanese classics I’ve been trying to get a hold of for a while: A Touch of Zen and Hou’s own A Time to Live and a Time to Die… so excited to watch them, hope I can find subtitles online!

Taipei was a very vibrant and lively city, with a rife scene for the arts—a trend which would continue throughout Taiwan. The rain cut out a chunk of my time here exploring the streets and simply wandering, but the atmosphere I caught was wonderful. Much more relaxed and informal that Japan (although Japanese respect culture is pleasant, sometimes I wonder why I deserve a bow from a 7-11 clerk handing me my receipt), while it’s identity lies in a kind of grey area, between a traditional history from China and becoming hugely Americanised because of their relationship with the US. Also in many ways the felt older than many major cities in China, as it’s economic surge came much earlier with the rise of ‘made in Taiwan’ goods—remembered vividly by my dad!

These goods are a perfect Segway into my next stop in Taiwan—Taichung—as it was one of the largest industrial producers of these goods! Taichung introduced me to another fantastic gallery (Museum of Fine Art), which you must visit if you ever find yourself there! I also used this as a base to hike around Dakeng national park, bringing wonderful views and unique walkways of log-pathways slightly elevated from the ground… although by the end of the day I could feel it in my feet as you’re required to put pressure in the centre of your foot, the inverse of normal walking! My body became kind of confused in my time here, as the bad weather passed I realised I was in 20+ degree heat day and night…but it’s the middle of winter, little did I know it would only get hotter and hotter throughout my trip! My dorm type in Taichung also differed from that in Taipei, I went from curtained off beds to ones without. I would always choose curtained beds for the privacy and ease of sleeping, however the change showed me an interesting change in social mind-set. I made few friends in Taipei, chatting to a few people in the hostel but more often than not keeping to myself, but in Taichung the day I arrived I had already introduced and learnt about almost everyone in the dorm room, including a Chinese man named ‘Jason’ who I chatted with at length. Now is this change simply because the people were more sociable, or does removing such privacy and such protective barriers actually make us connect with others?

As I was about to board the train to Tainan, I stopped by a bustling local breakfast place that served possibly the best Bao (steamed dumplings) and soy milk I have ever had! On to Tainan and, again, a wonderfully warm hostel filled with lovely Taiwanese (who immediately took me out for a fantastic savoury rice-jelly type meal) and travellers too. Tainan, being the old capital, had a little more tradition to it than Taichung however it’s modern-day personality is focused on being an art and culture hub. But often places that are attempting to have this identity fall into the trap of kitsch and mass-marketable ‘art’ products, which I notice a lot in some areas of Seoul too, and Tainan kind of fell into the trap. On a trip out of the city I visited a nearby national park (Taijian), which had a wealth of shore-line critters (crabs, mudskippers) and some interesting wablers, cranes and spoonbills (although I think it was the spoonbills migratory season away. But the real surprise about this park was the mess. It had a busy road running directly through the park and was lined on either side with litter. Broken fishing nets lay in the water surrounded by floating fish and I couldn’t believe that just outside the national park there were a number of fish-farms using dead cranes as scarecrows, hanging motionless by one leg from a pole at each corner of the farm. It felt so far from a national park, and it is such a shame as the other parks I visited in Taiwan were nothing like this. Just before I left Tainan a British girl arrived to stay a couple of days, it was wonderful to be able to have a really fluent conversation about all the sights, thoughts and feelings I had experienced over the last month—while just eating and wandering with someone else was a refreshing change, even knowing the friendship is extremely temporary.

Onto Kaohsiung (try pronouncing it, I dare you…it’s not actually so hard, the Romanisation is just really unusual), and as I arrive in the lobby of my hostel who do I see but Jason from Taichung! We chatted some more over the next few days, and visited a gallery together. It’s great to be able to make connections all over the world, as now I have a good friend who lives in Beijing! Another ‘art area’, this time the with worthwhile galleries, called ‘Pier 2’ was great, but I found it quite ironic that my favourite piece of all was by a British artist. It was an atmospheric maze-space designed like the under-decks of a cargo ship, with single light sources of spinning red lights and an alarm going off. As I visited it completely alone I was totally immersed and it was quite traumatically affective, something you don’t usually get to experience in a safe space. Wandering around Kaohsiung I was wondering why all the Taiwanese I had told that I was coming here had said they hated it. Admittedly there isn’t a huge amount to do, but it’s as nice a city as the others at least with it’s own unique charm.

My last day in Taiwan coincide with Tina’s last exam, which went well. I really loved Taiwan, it’s such a friendly, cultural and easy place to explore. What I loved the most, though, was an almost national appreciation for cinema. Everyone I met knew who Hou Hsiao-hsien is, and the countries cinemas were to die for—notably the SPOT Huashan and another in Tainan which coupled with a craftspeople over the road who hand-painted all of their film posters, from Justice League and Dispicable Me to Taiwanese screeners! However in many ways I was happy to leave it behind, as my next destination of Vietnam would reunite me with my friends from Seoul—and travelling alone, although fascinating, enriching and very active, does get kind of lonesome. 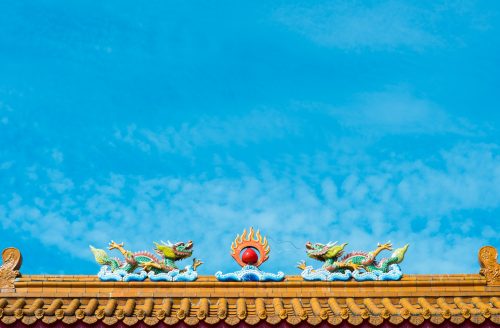 From Tip to Toe of Taiwan