As soon as I landed from Bali I had just enough time to unpack my clothes, submit a few essays before I was back at Adelaide airport and on my way to Melbourne with Tiz.

We were spending the first 3 nights of our trip in Melbourne city, staying at a hostel in a great location. I was a little apprehensive as I had never stayed in a hostel before, but for only $19 you can’t complain on a student budget and Tiz and I had decided we were going to be okay, we were in this together! The hostel seemed really cool downstairs, with lots of people chatting and it had a really chilled out vibe. Entering our room was somewhat different….it was 6pm and pitch black, a voice called out from the darkness and told us that we were opening the door wrong and it smelt disgusting, clothes everywhere! We dropped our bags and left asap! We spent the rest of the evening walking around Melbourne, seeing what the city had to offer in the evening! We found our way to 8-bit, an Asian style burger joint where we had the most amazing burgers, I could literally feel my arteries clogging up from the badness but they were so good! We spent our evening getting caught in a random fire display, walking around what could possibly be the world’s biggest casino before arriving back at the hostel for our first sleep (luckily I passed out and slept the whole night due to the lack of sleep the night before…the same can’t be said for Tiz!) 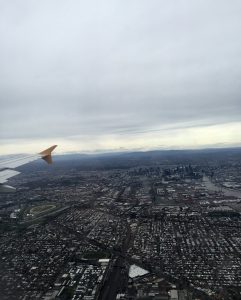 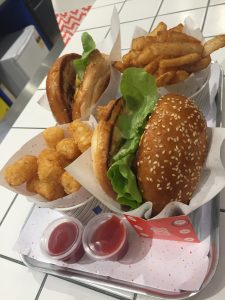 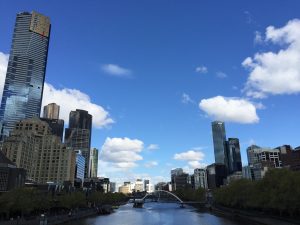 The next morning Tiz, myself and Chris (a guy from England on the bottom bunk who was living & working in Melbourne for the next year) went for breakfast in the city…Aussies really know how to do breakfast/brunch and Melbourne reallllllllly knows how to do coffee (I think Tiz and I probably had two cups a day; partly due to the lack of sleep!). After breakfast we headed back to our hostel only to find the entire road was closed, the pavement was full of half dressed, straight out of bed looking 20 somethings and there were 5 fire engines outside the hostel. We found out, after being asked to leave by a very angry police officer that there had been a fire inside the hostel laundry room…hoping that our belongings were fine, we headed to the Queen Victoria Markets to kill some time before they would let us back in! In the afternoon we took the free tram around part of the city, stopping off at Flinders Train station so that we could go up the Eureka Tower (975ft. gold plated sky scraper along the Yarra River) and look out across the city on the Skydeck (the highest public observation deck in the southern hemisphere (they really love their southern hemisphere claims in Australia!)). The views were incredible; you could see the city from every angle and the ticket only cost $13.50, around £7.70!! We ventured to China Town for dinner and ended up having possibly the cheapest and biggest dinner ever. What we thought were $8 side dishes of rice with a few vegetables and some meat were actually giant plates piled high with rice. Feeling very full we headed back to the Yarra River for drinks in a cute bar called Ponyfish Island, the bar is literally in the middle of the river, under the Southgate Footbridge. We enjoyed the incredible views with a glass of mulled wine beside the heaters (mulled wine in September doesn’t seem right but it is still cold in Melbourne!) 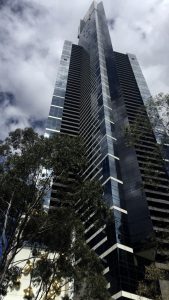 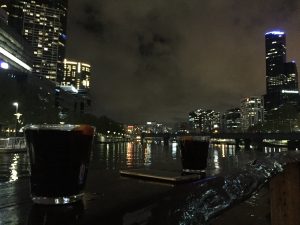 Being the poor students we are, we thought we would try the free hostel breakfast, we quickly changed our minds on the offerings of bread and Weetabix and headed to Degraves st. with Chris and picked up a coffee and a bacon, egg and cheese muffin, freshly made for $5!! This street was also home to a Doughnut Time, a hole in the wall doughnut shop offering some of the craziest, biggest doughnuts I’ve ever seen. It was my mission in Melbourne to try one of these after seeing a video on Facebook before I left home about their Nutella filled doughnut (http://www.businessinsider.com.au/nutella-filled-doughnut-from-doughnut-time-in-australia-2016-5). Doughnut box in hand, we headed to the botanical gardens en route to St. Kilda beach. Almost 7km later, we arrived at the beach, enjoyed the sunshine through the clouds (seems to be a recurring theme so far!) and devoured our doughnuts, Doughnut Time you didn’t disappoint. We managed to enjoy some sunshine, coffee (again!) and live street music along one of the shopping lanes before starting our trek back to the hostel along the water, with incredible views of the city! It wasn’t long before the rain arrived, again, but luckily we sat out the worst of it under a BBQ shelter in a park! The rain carried on into the evening so we decided to have dinner in Melbourne’s Little Italy, eating at the first Pizzeria in Australia! 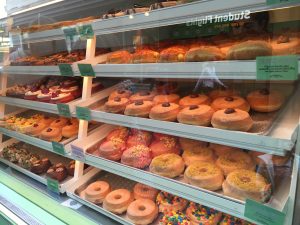 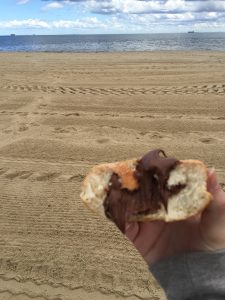 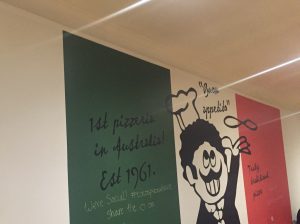 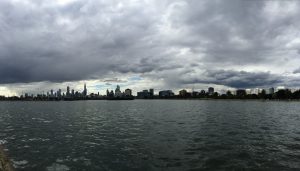 Our last night in the hostel was definitely an experience. Tiz and I were leaving at 6am to pick up the car from the airport so decided to get an early night. The day started very early when everyone (all 11 strangers in the room) woke up to the sounds of one very loud snorer! He was so loud none of us could sleep, and after shouting at him, clapping in his ear and shaking his bed, we had all pretty much given up on the idea of sleep and resorted to laughing about how ridiculous the situation was instead.

We picked up our car (Mikey the Micra) from the airport, and started our 10 hour day, heading towards the Great Ocean Road. Our first stop was in Torquay (there’s a lot of English place names in Australia!) where we enjoyed another great breakfast and coffee, Melbourne style. Back in the car we stopped at I don’t know how many beaches, it’s mad how many beaches there are in Australia and how many of them are completely empty! The Great Ocean Road is amazing, it’s so naturally beautiful and definitely something to put on everyone’s bucket list. Sadly, due to the bad weather causing landslides, we had to take a detour for what seemed like half the Great Ocean Road, which was neither Great or Ocean-y. The remainder of our day was spent taking emergency stops for photos of more beautiful beaches and remembering that the indicator was on the opposite side to our cars at home (sorry to all the people we put our windscreen wipers on to instead!). After what felt like forever we had made it to the 12 Apostles, the last stop on our 1st day before driving to Port Campbell. Sadly the sun wasn’t in the right position for taking photos, but it made for a great view! It’s safe to say our hostel was much nicer than the one in Melbourne. Port Campbell, like many of the towns along the Great Ocean Road was more of a street than a town! We had the most delicious dinners (In what we can only describe as somewhere neither of us had great expectations for!) and headed to bed, stomachs full and tired from a days driving. 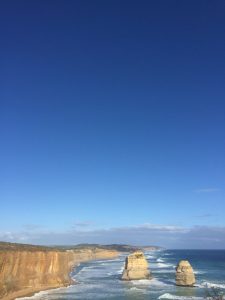 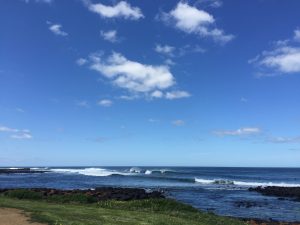 London Bridge was the next stop for our second day or driving, its mad to think that it was once connected to the other rocks, nature really is crazy! Most of our day was spent driving through logging forests and being amazed at just how many trees there could be in one stretch of road (if you got lost in there, you’d probably never be found!). We had another delicious brunch in what is possibly the cutest named town in the world, Port Fairy. More beaches and a giant lake later, we were told by some locals in the last stop before our destination for the night, that a storm was heading for South Australia and to stay inside for the night! Our last night was spent in a cabin with a TV, free Wifi and a kitchen (all of which we were really looking forward to, after almost a week without!). However, mother nature had different plans and the power went off shortly after we arrived due to the worst storm in 50 years hitting South Australia and the entire state losing all power! Settling into bed early, due to the lack of light and warmth, we accepted the fact that the power wasn’t returning till 4am! 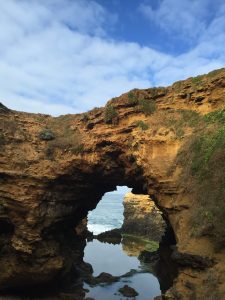 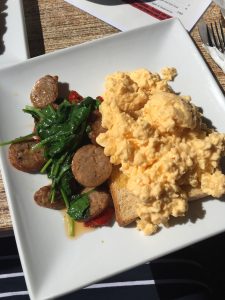 Our last day was spent travelling through various South Australian towns until we reached Adelaide. However nice it is to spent time away, seeing new things and having the most amazing time, there is nothing quite like being home (it’s very strange referring to Adelaide as home now!) and having your own bed back after 2 weeks of travelling! That evening I met with Chloe, Ella and Molly as we braved the end of the storm and headed to the cinema to watch Bridget Jones Baby (along with the other 4 people in the cinema…)

A Great Time on The Great Ocean Road

The Week I Went to Bali
Getting Settled in Pennsylvania

One thought on “A Great Time on The Great Ocean Road”