Well hello again to you!

A little update on the weather report… positive temperatures have been reached!! Yippeeeee!!  I’m beginning to sound like a broken record regarding the weather but it is such a novelty. I don’t want to tempt fate but it feels like it is finally starting to warm up. Canada really is characterized by a climate of extremes and the chill in the air caught me by surprise. As someone who considers themselves outdoorsy, or at least a person who enjoys going for a walk each day and generally being outside, I’ve actually found living in Canada as quite restrictive in that respect. You don’t really try to spend much time outside and if you do you are bundled up!! So if you wish to work off those maple syrup pancakes but don’t like the gym or fitness classes, good luck my friend!

Anyway, I am happy to say Mid-Terms are over and I’m back getting stuck in with lectures and good old coursework. Classes have been great so far, the lecturers are far more relaxed here than in England. They often play music as we come into class or during breaks- one of my lecturers in particular enjoys finding classics to listen to by Canadian singers and musicians (really I think he is a secret Justin Bieber mega-fan). But seriously, the “Profs” are very much down to earth and funny which makes everything more fun! It’s definitely nice to be taught by academics with a different outlook too- this is hard to explain but sometimes it’s nice to study your favourite subject from a different perspective and I really feel like that’s what I am doing here.

Another thing I’ve been enjoying whilst on campus is counting how many people wear purple. The Book Store (it’s name fools you because only 1/3 is actually dedicated to books) is brimming with every kind of Western University themed piece of clothing, accessory or studying essential you could imagine. And the students are completely absorbed by it. They make their #purpleandproud take on a whole new meaning. This university is the only place where its acceptable for a person to wear head to toe purple. I’m talking from their hat, to their socks to their backpack. Everything. Don’t worry everyone, upon my return to England I won’t be dressed in Fifty Shades of Purple I’ll leave that to the Western University students.

Okay so what have I been up to…

Well, some friends and I went to a trivia night shortly after exams which was quite possibly the funniest experience I have ever had. Mostly because upon our arrival we discovered that we were the only second years taking part and everyone else were Masters students who took the whole thing VERY seriously. Safe to say we came last with a grand total of 12/100 but we had the whole room in hysterics over our attempts at answering the questions!

Last weekend I had a little adventure with my friend to downtown London to check out what it had to offer, and safe to say it didn’t disappoint! We headed to Covent Garden Market which is a huge indoor farmers market with all sorts of local, organic and delicious foods on offer. I was spoilt for choice! They had such a variety of produce on display from flowers to cheese to ice cream to ELK! We wandered around for hours finding all sorts of things! Once we finally decided what to have for lunch we sat up on a balcony overlooking the market stalls where we were treated to a concert by local legend Rick McGhie. I enjoyed a delicious homemade Broccoli and Cheddar soup made with fresh veggies and local cheese, it was the perfect thing on a cold day. And OF COURSE we enjoyed a sweet treat afterwards, who wouldn’t?? 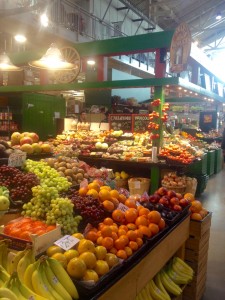 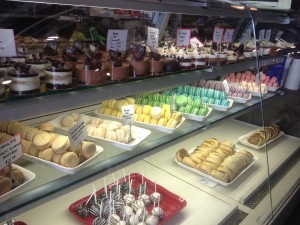 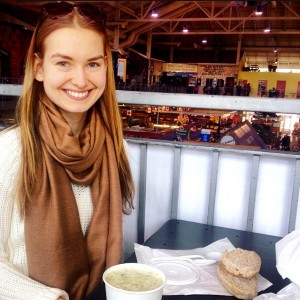 After Covent Garden Market we walked around downtown and checked out the cool little shops and found ourselves at the London Museum. It caught my attention because it had a giant metal rhino outside, I mean think of the last thing you would find in Canada… a rhino has got to be it! So we walked into the museum and pretended to be cultured adults as we explored the exhibits, just after having our photos taken with the rhino (see below). 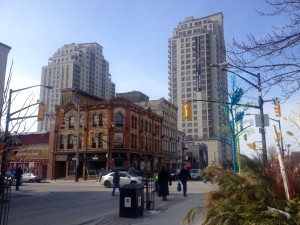 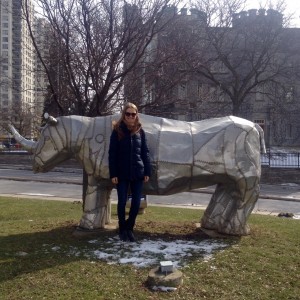 This week has been Play Offs week which is basically the finals of the sports events here at the end of the season. This time I watched the Mens Basketball team face-off against the Lakehead Thunderwolves (what a name). It was a close game throughout and sadly we lost by 2 points!! Like the hockey it was so much fun to watch. There was a DJ and we all had clappers, pom poms and one lady even had a cow bell!! They kept the crowd happy with half time games and activities. I had a moment to shine when I was caught on “Dance Cam” so I busted a move and had a laugh- really I was just grateful it was that rather than “Kiss Cam” that came before it!!

So the other night I was coming back from class and heard some music playing in the grand hall of my building. So I peered through the door to find a Petting Zoo going on in there. YES A PETTING ZOO. Like I said in my last blog, these Canadian Halls of Residences are amazing!! So I had a fun time feeding goats, sheep, a cow and alpaca! It was so unexpected and so much fun! This place always manages to keep me guessing.

So that’s basically a quick round-up of a couple of things I’ve been doing this past week! I’ve been really enjoying my time between classes spent with my new friends. It’s going to be very sad to leave them soon but that means all the more reason to come back! I feel like I’ve made some life-long friendships here, yet another perk of the exchange program!! I must admit I’ve been missing my friends back home too. Now that I am halfway through plans are being made for many meetups for when I come back home which I cannot wait for and makes me miss them even more!! But soon we will be reunited and being away has made me appreciate them so much more. Now I’m going to go all “Wise Wallum” on you now, but future exchange students if there is one thing I would advise you to do (beyond general common sense things like look before you cross etc.) that is to keep in touch with your friends and family back home while you are away. I have made a point of regularly Facetiming, emailing, messaging etc. my mum, grandparents and besties because not only has it kept me updated with the funny goings-on back home but it has also got me through some tough times. Being on exchange is AWESOME but feeling a little isolated or homesick happens to everyone when they’re living in a “foreign land” and keeping in touch with the Brits back home is vital to keeping you grounded and sane! So don’t pretend to be a lone ranger (even he had a horse to keep him company) and stay in touch with everyone.

So for now I will leave you dear readers and catch up with you again soon!

Western University so far!
Adelaide Exchange – 2 months in and plenty of kangaroos later…