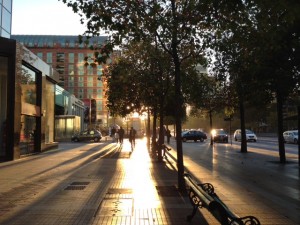 So after finishing my semester studying in the Pontifical Catholic University (UC) and having a couple of months off to travel and explore the south of Chile, I finally started my work internship in the actuarial department of a reinsurance company in Santiago. Initially I was quite nervous, but I thought at least I would be able to understand my colleagues as my Spanish had improved greatly over the previous 7 months. However, I quickly realised that Insurance, as with all industries, has a lot of technical language that I simply didn’t know in English, let alone in Spanish. The first couple of weeks were difficult (not least because I wasn’t used to waking up at 7am and getting ready for work!) but I soon became familiar with the terminology and technical tools that I was learning. 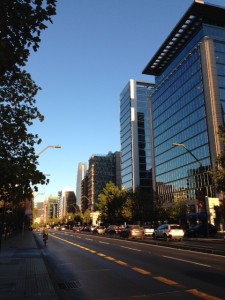 I personally have enjoyed working much more than studying at the university this year, as I felt I learnt a great deal of skills very quickly which I think will prove useful later when working. I have liked seeing the methods and formulae that I have learnt over the previous years of my degree being used in real life situations. It’s also very interesting to see how an office runs in another country and getting to know people that I would never normally have the opportunity to socialise with.

The one thing I would say about choosing to take an internship or job instead of studying is that you are less likely to meet people of your own age. I was lucky in that I had a network of friends – both international and Chilean – before I started working. The employees in my office were all at least ten years older than me and, whilst being very friendly, weren’t exactly going to ask me to go out with them on a Friday night. Hence, if you are planning on just working for the year I would advise that you make an effort in the beginning to join a local club if you have a hobby and try to socialise with Chileans. On a year abroad, it can be very easy to just mix with foreign people in a similar situation to you, and whilst I do feel that it’s good to have friends who can sympathise over cultural differences, a fundamental part of living in a city is getting to know the people and really understanding the culture. 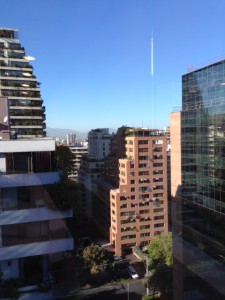 I have found my internship very rewarding, but realise that it probably wouldn’t be what a lot of students want to do during their year abroad. Therefore, I think it’s important to try to fit in as many experiences as possible during your year, be it travelling, studying, working or just socialising, to make the most of your time living in another country.

Willkommen in Hamburg
Spring and Chicago