The first week of spring ended opposite to how it had started, with what seemed to be endless amounts of rain, making the past weeks warmer weather seem long gone! All the locals keep saying how it has been the worst winter, and now spring, that Adelaide has seen in many, many years…typical! This week was spent catching up on all my uni work and making progress on my essays, frantically trying to finish and submit all my work before the mid-semester break.

On Wednesday was the ESN mid-semester break event at the Black Bull. Pauline had promised to make crepes for us and had invited some of her friends round before we all headed out. A few crepes later and god knows how many people in our small kitchen area, we left for the Black Bull which was completely empty and very smelly! We danced for a while and then headed back home at a reasonable time to get some sleep.

On Thursday I worked on my essays from home and spent the day trying to pack for Bali. After making dinner, Lindsay, Pauline, Kayla and I set up a movie in Kaylas room, cozied up on the bed and ate warm butter popcorn…so very American! Friday was spent rushing around, last minute packing, going to the bank and exchanging money (the Indonesian currency is crazy, you will feel like a millionaire!). After waiting what seemed like forever sitting on a metal pole in the airport, I made it onto the flight (travelling on staff travel definitely has its perks, cheap flights! But can be very, very stressful when you are the last person allowed on the flight and have to rush through security!). It seemed like everyone was travelling to Bali, and as we all took our seats I realised my phone battery was running low, leaving me with one song and a few apps on my iPad for a  5-hour flight, to say I was glad to land would be an understatement! (I won’t be listening to that song again for a while!). Feeling like a real grown up I made my way through security, to a taxi and to the hotel where Ella and Molly were waiting up for me (including a few minor errors…I’ll blame it on the lack of sleep!). After what seemed like the longest day, we settled down at 3am, ready to be up and out for our day at Potato Head Beach Club.

We took a 20-minute taxi from Kuta to Potato Head beach club, Seminyak, it took us a while to figure out the currency, as the meter read 40,0000 IDR, but after being told to take four 0’s off the price, we realised the taxi only cost us $4, around £2.28, madness! We hired a beach lounger for the day which could fit up to four people on and spent the rest of the day soaking up the sun, sitting by the pool, eating incredible food and drinking cocktails out of shells and carved wooden cups! That evening we needed to change some money over, asking the reception for directions led us on our way out of town, with no pavements and what seemed like risking our lives trying to cross the roads! With our money exchanged, and being new found millionaires, we took a taxi into Legian for our first Indonesian dinner. The Indonesian food was such a welcome change to the typically fried food in western culture! 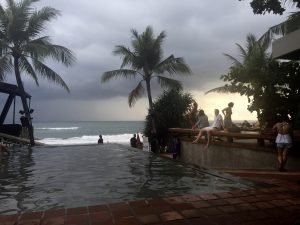 6:30am and we were up and on our way to a port for our boat journey to Gili T, an island close to Lombok. Stupidly, we thought the boat would be like a bus, frequent and tickets available on location…we were wrong! Luckily our hotel had called the day before to reserve us 3 tickets, but the only proof we had was some scribbles on a piece of paper! 2 hours after waiting we were onto the boat, but with tickets for ‘Clive’, not the name we had booked with but we weren’t complaining, we were just grateful to be on the boat and on our way! After a 2 hour, very bumpy journey and managing to make it back down inside the boat, after stupidly deciding to be the tourists we are and take the top deck seats (so many regrets, it was so windy we couldn’t even talk to each other and were scared to stand up and go downstairs for fear of being blown over) we arrived in Gili T. There are no jetty’s (piers) or docks in Gili T so the boat docks on the sand and you leave the boat via a ladder straight into the sea! Taking a horse taxi to the hotel (cars and motorbikes were banned from the island to conserve and protect the natural beauty), we finally made it to paradise! 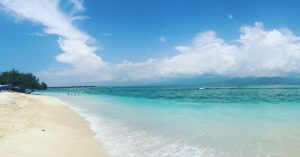 The next few days in Gili T were spent relaxing, eating incredibly fresh food with even better views and lots of heat and humidity. We spent our last evening in Gili T watching a movie laid out on sunbeds on the beach with the full moon behind us, how amazing?! Checking out of the hotel was a breeze until we thought we had the boat timings wrong and were going to be late for the boat…panicking and realising our horse taxi wasn’t going to turn up, we walked as fast as we could to the boat ‘terminal’, dripping in sweat we arrived, only to find out that we were actually right with our timings and now early for the boat! Standing under the trees to cool off, we waited in the shade and started to calm down. Only until something dropped on my head and I had been pooed on by a bird…lovely. If that wasn’t bad enough; the combination of heat, humidity, sweat and bird poo…my nose started bleeding! Great! After another 2-hour boat journey and the same in a taxi, we had made it to our last stop, Ubud. A lovely, less urbanised area of Bali, but still very very busy with scooters everywhere! 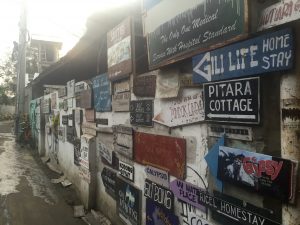 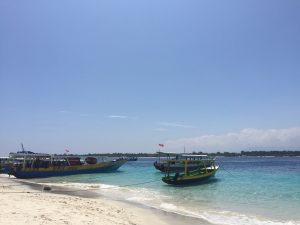 Our first day in Ubud was spent at the Monkey Forest. As one who doesn’t particularly like animals, I wasn’t too fussed on this visit (and after reading all the reviews about the monkeys stealing various items from people, I was a little apprehensive!). The forest was huge and there were monkeys EVERYWHERE! The trip ended when Ella, who decided to buy a bunch of bananas to feed the monkeys, got bitten! Over an hour later sat waiting in the clinic, a few tears and a call back home, Ella had her first 2 rabies injections (despite being assured by the forest first aid that the monkeys were rabies free, you can never be too careful). The rest of the day was spent relaxing by the pool and seeing the funny side in being bitten by a monkey! 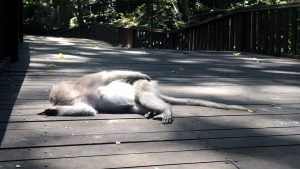 Our last full day in Ubud and we had last minute (again!) booked a private driver for the day. Made (pronounced mar-day) picked us up from the hotel and drove us around for the entire day, visiting temples, wearing colourful sarongs to enter the temples, sheltering from the rain, eating lunch looking out onto Mt. Batur, swimming in natural hot springs, tea and coffee tasting at a coffee plantation and climbing the rice terraces! We learnt soooo much from Made about Ubud, Bali and the Ubud villages, he actually told us to keep asking questions as we were there to learn! 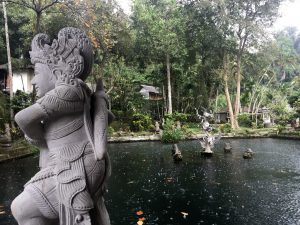 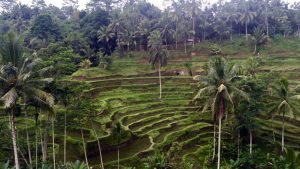 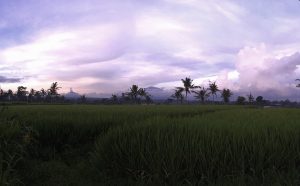 Sadly our time in Bali had come to an end, we spent the last day visiting the Ubud markets and Palace, before soaking up the last few hours of sunshine before the rain arrived. After a very long drive to the airport, I then spent the whole night awake on the plane (why are 12am-6:30am flights a thing?!) and we arrived in a rainy, cold and very grey Adelaide! 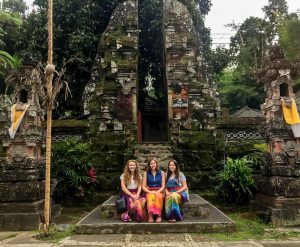 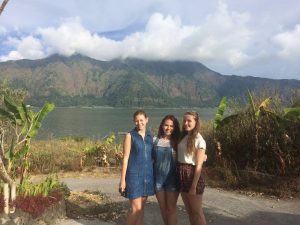 The Week I Went to Bali