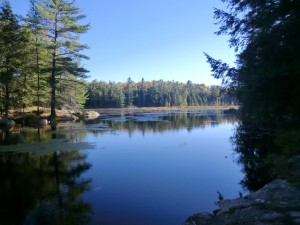 Poppy’s last post has pretty much covered the academic style here at Huron, but one thing that really struck me on first arrival was the abundance of exams. Having carefully selected my modules, which coincidentally were all ‘essay courses’, I was rather surprised to discover that there would be a final exam in each of my five courses, ranging from 35- 50% of the grade. And no, this does not appear to mean that there are any fewer essays… So while Huron’s definition may be a mystery to me, I have plenty to keep me busy! I have also noted the inconsistencies between professors’ marking of assignments as there does not appear to be a standardised method. Some prefer to give letter grades, while others give the amount of marks gained from that assignment, and more still use the percentage grades that we’re accustomed to at Southampton.

But there is something to be said for life on campus, and I’m sure it would be far too easy to come here and never leave for the entire semester! Everything you need is contained either at Huron or a short walk away at main campus, despite the fact that we were issued with bus passes at the start of term and getting around the town is no problem. Huron has its own chapel, common room (complete with bar – The Beaver Dam!), library, computer room, dining room and many other facilities. There are also microwaves scattered around campus – and always long queues of students waiting with their ready meals! Although the college is comparable in size to Avenue Campus, it boasts a number of student run societies with popular favourites including the History Society and Tea Club. Student fashion however, does have something to answer for. It is not uncommon to see students roaming around campus in pyjamas, sweatpants, and occasionally dressing gowns! With the exception of a fraternity that seems to wear suits on Tuesdays, standard attire also includes some form of school merchandise at all times.

But I will not be one to stay on campus 24/7, as I fully intend to make the most of being on the other side of the world! London, Ontario is only about 2 hours from Toronto and from there it is fairly easy to travel anywhere. With the Canadian Thanksgiving in the second week of October, the University gave us a long weekend and I took that opportunity to visit Silent Lake, one of the National Parks while it was still warm. The ever present threat of bears didn’t ruin the beautiful views and it was a lovely, if tiring, weekend. Many students have cars here, and this weekend we found out why. It is relatively was to hire a car (although they do add all kinds of charges if your driver is under 25!) and it is necessary to drive to some places since they are almost inaccessible by public transport. 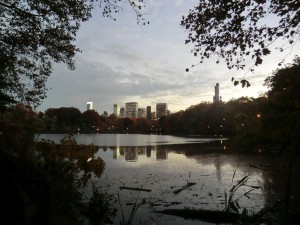 However, last weekend I had the opportunity to visit a city that is most definitely accessible. With the university shut last Thursday and Friday for the study break, I took 13 hour bus journey to New York with some friends. Travelling overnight and navigating border control at 4am certainly wasn’t the highlight of the trip, but the new stamp in my passport was well worth it! New York was at least 10 degrees hotter than London which I wasn’t prepared for, but we enjoyed the (mostly) beautiful weather. After visiting all the typical tourist traps such as the Empire State Building, Statue of Liberty and Central Park, I treated myself to an I <3 NY jumper in Times Square. If I were to do the trip again I’d probably fly there so as to have more time, but I thoroughly enjoyed the bus adventure and nothing beats the sunrise on the road!

Life at Huron University College – Study, Exams and Coffee!
Poutine, shopping and the Wonders of Toronto