I’ve just landed back in Sydney and am sitting on a train back to my Aunt’s house to spend a week with family. The last week has been very relaxing and full of sunshine and catching up with family friends. So I thought I’d write up a blog post:

I was in Burleigh Heads, Gold Coast, for a few days where I lazed around on the beach listening to podcasts and reading; went whale watching and saw what looked like an adult and two young whales. One seemed to be on their back as you could see the white-underside of their fins as they splashed them up and down. They were also jumping up and crashing back down – so cool to watch! We followed them to another spot where I got photos through the binoculars, and then drove further up and saw them a bit again. 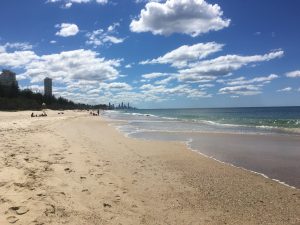 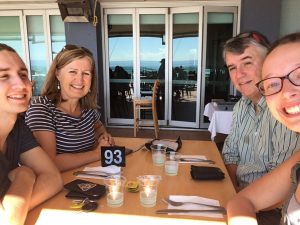 My time in Brisbane included a night out for drinks with friends which involved cocktails and political discussions till the early hours of the morning – my type of night.  I saw their Oxford Street which is near the river so we went for a sunny walk one morning with sushi for breakfast. The highlight of Brisbane had to be skydiving though. 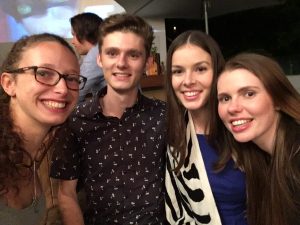 When I was thinking about things I wanted to do in Australia during this semester, skydiving was on the list – as cliché as the experience seems! So, on Monday, Hamish and I drove down to Redcliffe, less than an hour away, and after signing some forms, we walked along the beach and had a light lunch whilst we waited for our departure time. We got suited up in a giant harness which reminded me of the 5-7 year olds I’d put in full body harnesses, when I volunteered at a climbing club, because they were so tiny!

The group before us then arrived back, and we met our instructors – I had a man called Cookie. They talked us through what would happen when we jumped – head back against their shoulder, hold onto the harness straps, wait for a double tap before extending our arms etc. You can see in the video they took of my jump that he moves my head into the right place at one point! We were the last group of the day, and only 3 (out of the possibly 8 tandems), and took a short minivan ride to an airstrip. At this point the excitement was definitely above the nerves – I only felt a few butterflies whilst waiting for the previous group to arrive back to be honest.

We had all decided to pay for a photo/video option so all the go-pros were out at this point doing little introductions and interviews; then we boarded the plane, got hooked up to our buddy, and took off! Once we reached 1200 metres, we all put our goggles on, they opened the side door – making it very cold – and the first man jumped! A second later we were shuffling over to the door and before I could catch up with the fact I was about to leap out of a plane, I felt my stomach drop and air whooshing past my face. My ears popped and my eyes watered a bit and I was very aware how dry my mouth was because I was grinning like no tomorrow! Just as I was starting to think it had felt like 50 seconds or so (we were told it could be between a 40 seconds – 1minute freefall) there was another stomach-dropping feeling and we were pulled upwards from the opening of the parachute.

The views were unbelievable, it was also surprising how clearly I could hear Cookie – he said I could take my goggles off and pointed out the sunshine coast as we glided smoothly towards the ground. He then said I could steer and gave me control telling me to pull first on the left pulley-thing, then the right – spinning around at an almost 90-degree angle was so much fun. I can’t even explain the feeling – I’m smiling to myself now just writing about the jump. Anywho, we came in towards the beach, Cookie was steering again obviously, and landed on the cross – X marks the spot. 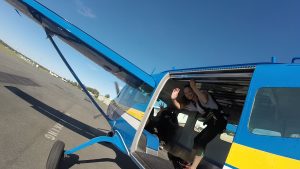 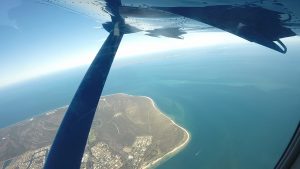 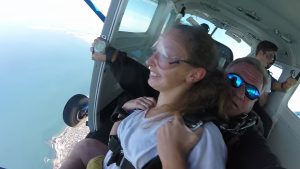 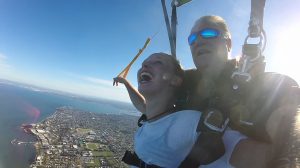 The day was finished with a trivia night with Hannah’s friends. The next morning we all went for breakfast before I was dropped off at the airport, and that takes us to now – back in Sydney again!

Been Having a Whale of a Time

Check out my blog!
First month in Western Ontario!