After spending my Summer on the West Coast I was sad to leave but ready for a new experience which came in the form of The Pennsylvania State University. Before I arrived at Penn State I spent a few days in The Big Apple with my Mum and little Brother, seeing some of the sites, taking in the atmosphere and indulging in some classic New York food (see $1 pizza!). The weekend was soon over and it was time to board the Megabus to State College, not the most glamorous mode of transport but it definitely got the job done. The journey from NYC to State College took approximately 5 hours and when I arrived I was exhausted, I picked up my dorm room key and promptly hit the hay.

The next few days entailed the standard new student orientation, with a focus on us international students, it was entertaining if slightly repetitive but as soon as it had started it was finished, we were ready for the Americans to arrive, which was not a subtle affair. The campus went from a world on serenity and peace, where us Internationals had free reign, to a bustling hub with the newly arrived 50,000+ undergrads. The most drastic change for me was probably the wait time at Starbucks, gone were the days of quickly grabbing a Frappe before class, now that was a solid 30 minute commitment. However, there were some perks, namely new people to meet, my roommate being one, the clubs were starting up and life quickly became more normal especially with the start of classes.

Speaking of which, most of my classes where more reminiscent of secondary school than University, being held in classrooms as opposed to lecture halls, with class sizes ranging from 30 to only 9. My only lecture hall based class, ECON102, is a Freshman level class and is fairly similar to the experience we get back home with about 270 people per class. This is the only non-Engineering class I’ve taken this semester and it’s a nice change of pace for me and interacting with the Freshmen is certainly, well, they’re an interesting lot, more enthusiastic than the Freshers back home I’d say.

For my 21st I travelled to Philadelphia to meet up with my family, they flew out to surprise me! Philly is a great city with so much to do, perfect for a weekend trip away. We did all the touristy stops such as the Liberty Bell, Independence National Historical Park and of course the Rocky Steps (cue the music!). I also learnt the true joy of the classic Philly CheeseSteak, however I would advise against indulging too heavily in these as they really add on the calories! Philly is only a 40 minute flight from State College and the plane was mostly empty so it was like taking a private jet, but it can be costly so book early!

These first few weeks have provided several new experiences for me, not least of which was a free ticket to the local concert at the Bryce Jordan Centre, thanks to the SPA. They try and get a few tickets for every event that comes through State College to give us poor student a chance at seeing the acts. It didn’t hurt that the ticket that I got was for Kanye West, he put on a great show! 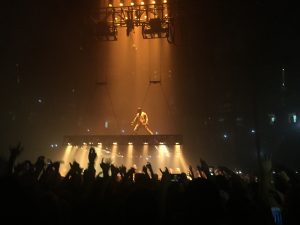 I also attended the first (American) Football match of the season. If you ask me, $60 was a reasonable price to pay for the atmosphere alone! Beaver Stadium is the second largest in the northern hemisphere boasting a 107,000 capacity and everyone in there was up for a party. The match itself lasted about 4 hours, of which we spent all all four standing, but the entire day seemed devoted to the sport. There’s tailgating before and after where strangers will take you in to feed and water you, you play games and make friends in the fields surrounding the stadium. All in all, it’s a must try experience! 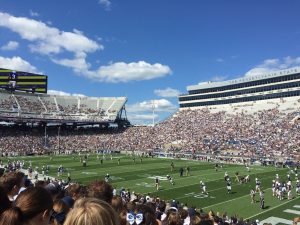 Now a month or so in, the weather has started to turn more autumnal now, which is a welcome relief from the sweltering heat of the first few weeks, and the campus has really taken on a new feeling with the golden brown leaves, big winter coats and pumpkin spiced everything all over. I’m very much looking forward to what Penn State has left to offer over these remaining weeks!

Getting Settled in Pennsylvania

A Great Time on The Great Ocean Road
Blogging no Brasil: Episode 3

2 thoughts on “Getting Settled in Pennsylvania”