Chuseok is one of the largest festivals in Korean culture; it is a harvest/thanksgiving style festival which merits an entire week of national holiday! Over this period families regroup in their hometowns to pay respect to ancestors while enjoying special Chuseok foods. This movement of people leaves Seoul quite quiet during this period. For a long time I was weighing up whether to travel to a different city, but I am glad I chose to stay in Seoul as attractions are quieter, public transport is easier, and it generally feels like a much more relaxed city—even though the space is identical!

This time and space has allowed me to explore some really interesting sites in and around Seoul:

First off, Heyri art valley is an artistic community formed just outside of Seoul. It contains a huge amount of interesting architecture, art galleries and probably one of the densest populations of cafés I’ve ever seen. It’s a strange place really and I’m not sure it entirely lived up to it’s expectation, although I would like to go back and explore it further. It feels like more of the space is comprised of cafés and kitsch museums rather than interesting or challenging art galleries. However maybe this is just a surface which most visitors dislike, and the real galleries are hidden away only easily accessible to those in the know, or those with the Korean map! 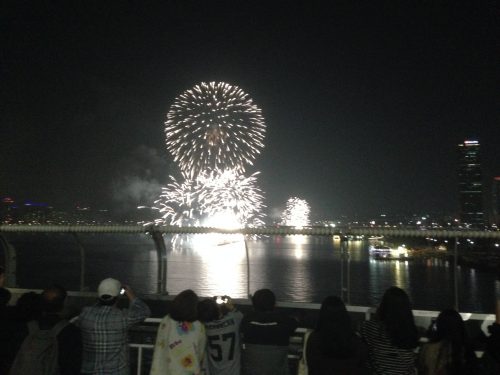 Seoul’s international fireworks festival lay two days before everyone left for Chuseok, and provided the polar opposite of an empty city. Standing on Seogang Bridge, which itself was also full to the brim, I looked over to the south bank of the river where I don’t think I could see a square-foot of floor-space. Overcrowded for sure. The fireworks were great, but after 20 minutes they somehow lose their charm—or maybe (as I kind of know) fireworks aren’t really my biggest love.

Next I explored the Haneul park sky-garden, a tranquil river-side park 300 steps above ground level. It was comprised of dense wheat-like and sunflower patches giving the illusion of the countryside even though you’re in pretty central Seoul. It’s great to have such well-constructed park areas, they vary a lot from England. While English parks tend to provide open-space for recreation Korean parks construct themselves for tranquillity, creating pathways through carefully planted plant-life, streams and seating/picnic areas. This approach is funny, as I wonder where you’d go to play recreational sports, but it is definitely very suited for adult generations to quietly relieve the stress of a big city.

On Wednesday I visited Seoul Grand Park which is, in my opinion, a great improvement on an average ‘Family Park’. It contains a children’s park, a theme park with rides, a zoo and a wing of the Museum of Modern Contemporary Arts (MMCA). I personally visited only the zoo and the MMCA. Seoul’s zoo was massive and had a hugely diverse array of animals, but a mixture of the vultures lacking enough space and monkey’s hands reaching from their cages (mimicking many human images of imprisonment) brings about ethical considerations too large to ignore. Although a zoo like this makes an entertaining and educating day out, it creates miserable and psychologically disfiguring lives for the animals…so an awfully mixed review. The MMCA may feel out of place here, but I in fact think it’s a wonderful idea. Housed in a magnificently large building (likely unavailable within Seoul) it challenges you to the maximum with it’s exhibitions in contemporary art. Unfortunately I could only catch 1 ½ before closing time so I’ll be sure to head back soon. 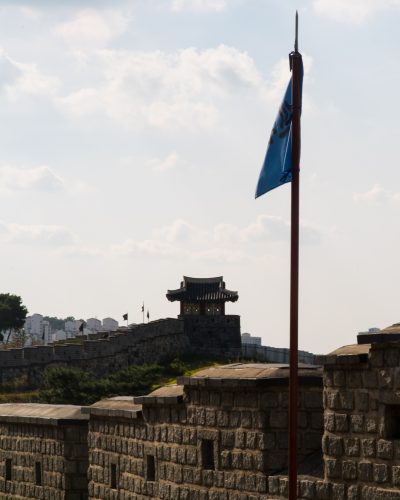 On Thursday we ventured to Suwon, a city just south of Seoul which houses Hwaseong–the last fully constructed city wall in Korea! It was a nice way to spend a sunny day outdoors, but it was funny to be on an ‘ancient’ (partly-reconstructed) wall in the middle of a sprawling and bustling city. 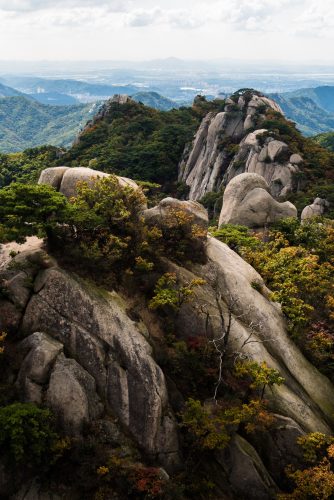 As I sit here writing this now, I am exhausted after a hectic week—with the above merely being the highlights! Today we, along with a Korean friend and her brother and cousin, climbed to a peak in Bukhansan national park—which is only one hour away from my accommodation and gives you a beautifully awe-inspiring view of the entire city in one direction and a sprawl of mountains in the other (south and north respectively). 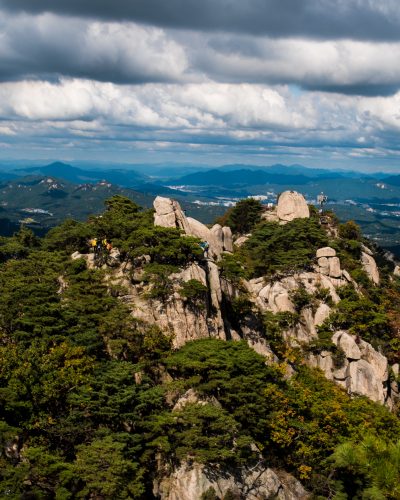 Chuseok has been an interesting period, in some ways returning to the ‘touristy’ feeling I had when originally arriving here, but with a newfound comfort and confidence in approaching a number of different activities. The feeling is still somewhat strange though. I need to knuckle down over the next couple of weeks with my Korean textbook and really try to learn more of the language, and maybe I will remove the strange ‘foreigner abroad’ feeling which is accumulating, and unlock a whole new level of Korea. I’ll keep you posted!

Chuseok in and around Seoul