Hello, I’m Hetal and I am a third year Philosophy student and am currently on my year abroad at the University of Adelaide, Australia.

The journey from London to Adelaide was, to put lightly, a long one. Australia is over 10,000 miles away and so it literally took a day to get here. So, after getting on 3 planes, crossing a few oceans and some continents, I finally got to Adelaide. Adelaide is a city in South Australia and though perhaps it may not be the most popular of Australian cities (I’m looking at you, Sydney), choosing to study for my year abroad in Adelaide is a decision that I am certainly pleased I made! Adelaide is very easy to get around due to its grid layout and free trams that go around the CBD. It has markets, a big mall in the city centre, many restaurants, a handful of places to go sightseeing, beaches and some open space just outside the city for those warm (45 degree heat…) picnic days. 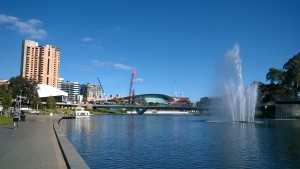 The University of Adelaide was half way through its academic year when I arrived, but even though this was the case, settling in was made easy. The people I have met have been very friendly and the Exchange Student Network (ESN) at the university at Adelaide has had events every week for the international students so that we can meet new people and get to know Adelaide. The first week was called O’week (Orientation Week) wherein there were events every day of the week leading up to the beginning of lectures. Events consisted of free BBQ’s, pancake breakfasts, tours around the university and the city area of Adelaide.

The University of Adelaide teaches its courses differently to the UK system. At Adelaide, students are allowed to plan their timetable and take more than one elective a semester, meaning that students can study a range of modules and are not limited to sticking to only their major subject. In taking advantage of this, I am studying modules in Anthropology, Latin and Philosophy.

The first month of being in Adelaide has been focused on settling in and exploring the local area. So far, I have seen Koalas and Wallabies, been to BBQ’s, been introduced to Aussie rules football and had a few weeks of lectures. I took a trip to Victor Harbour that the ESN had organised, which is where I got to see a lot of the Australian wildlife from a safe distance, as the wildlife here really is dangerous! Aussie rules football is an odd game to watch for the first time, as it seems to be a rugby/football/netball mash-up, but definitely worth going to the Adelaide Oval to see as the atmosphere is incredible and the stadium is huge! Contact hours in university are roughly the same as back home (I usually have 12) with the exception that the University of Adelaide have more seminars compared to that of Southampton and more emphasis on participation in class as this usually makes up around 10% of the module grade – though this is not always the case. The class sizes are also a lot bigger than what I am used to as philosophy back home has around 30 students in a class, but Adelaide has over 100. This would be because students from other academic disciplines can take modules in philosophy, which is quite nice as I get to meet students from a range of other courses in lectures!

The first month in Adelaide has been good and I look forward to the next!